(Clearwisdom.net) At noon on September 29, 2006, the United States Congress held its first hearing on allegations of the Chinese Communist Party's (CCP) organ harvesting from living Falun Gong practitioners. Four witnesses testified at the hearing. More than 100 people, including House representatives, legislative assistants, officials and advisers from the US government, and reporters attended the hearing. Senior congressman Dana Rohrabacher of the House Committee on International Relations urged the US government to take further action to stop these crimes. 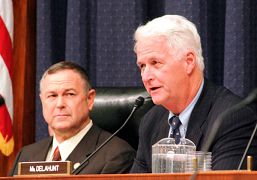 David Kilgour and David Matas testify at the hearing

Congressman Rohrabacher, Chair of the Subcommittee of Oversight and Investigations of the House Committee on International Relations said during an interview after the hearing, "What we have learned today is that there is a monstrous crime going on in this world. Just repression of people's religious freedom is bad enough. But for the government of China, they take those religious practitioners, who are no threat to anyone else in their own country, but then to take them to prison, and execute them in order to get their body parts to sell for profit. This is a new level of evil. And today we heard the evidence of this evil exists, and now it's up to us to put pressure on the Chinese government to end this evil."

Congressman Rohrabacher said that facing such evil in the world, we cannot keep silent. We should not ignore such evil just because of commercial interests from such a totalitarian regime.

CCP's feeble response to the allegation of live organ harvesting

Mr. Kilgour and Mr. Matas introduced their "Report into Allegations of Organ Harvesting of Falun Gong Practitioners in China", which aroused attention in many European countries. They called on the international community to stop these crimes against humanity.

Mr. Matas said in the hearing, "We examined every avenue of proof and disproof available to us, eighteen in all."

Mr. Kilgour said that all the evidence brought them to their conclusion. "One month after the report was published, the Chinese government's only dispute was that we spelled the name of two provinces wrong."

Mr. Matas said, "We are reinforced in our conclusions by the feeble response of the government of China. Despite all their resources and inside knowledge, they have not provided any information to counter our report. Instead, they have attacked us personally and, more worrisome, attacked the Falun Gong with the very sort of verbal abuse which we have identified as one of the reasons we believe these atrocities are occurring.

"The repressive and secretive nature of Chinese governance made it difficult for us to assess the claims. We were not allowed entry to China, though we tried. Organ harvesting is not done in public. If the claims are true, the participants are either victims who are killed and their bodies cremated or perpetrators who are guilty of crimes against humanity and unlikely to confess."

Mr. Kilgour mentioned the situation of human rights attorney Gao Zhisheng, who has been detained by CCP since August 15, "I must also give credit to Amnesty International for putting out an emergency bulletin recently about the arrest of China's most courageous lawyer, Gao Zhisheng. Indeed, it was Gao who invited David Matas and me to come to China to investigate the matter of organ seizures from Falun Gong prisoners, although we were not granted visas by the government of China."

Congressman Rohrabacher said that the report by Mr. Kilgour and Mr. Matas caught the attention of media across the world. He hopes through this hearing, the US and Congress will pay more attention to this report.

Mr. Erping Zhang: Speaking up about the persecution with no other choice

Mr. Erping Zhang said, "The regime has robbed Falun Gong of any voice by burning its books in mass rallies, banning all Falun Gong related literature, and blocking all Falun Gong websites and even Western news reports. Under this circumstance we have been left with no choice but to speak out. Our goal has been simple and singular: to let people hear our side of the story, to expose those violating our rights, and to, by doing so, end the genocide we face. We are not interested in political power. We would love nothing more than to meditate quietly in parks. But when people beat down our doors and arrest and torture our parents, friends, and children, when they try to wipe out our very existence, we feel duty-bound to speak out.

"Secondly, I would point out that Falun Gong is not deviant, weird, or dangerous, as China's regime has tried to portray it. Consider the bigger picture. For one thing, all of the accusations the regime has made came overnight, with the banning of Falun Gong in 1999. During the seven years before then, from 1992-1999, Falun Gong was practiced by millions and was totally mainstream, and even praised by various official bodies of the Chinese state. That is to say, the accusations were a sudden political invention. And these accusations, it is worth noting, are something Chinese officials do not allow outsiders to investigate; those who try are arrested. Or from another perspective, we might note how none of the accusations made by the regime are made in Taiwan, another Chinese society. There, hundreds of thousands on the small island practice Falun Gong freely.

"Our efforts are done fully for the welfare of China's people, and even, insofar as we seek to uphold the law and constitution, for the sake of the country. There is nothing 'anti-China' about supporting constitutionally-guaranteed rights when they are abused, or pointing out the perpetrator. Surely 'China', after all, is the people of that vast country -- and not its unelected rulers, who so regularly abuse and exploit her people for their narrow, private interests."

Congressman of Massachusetts praises Falun Gong practitioners in his hometown

Congressman Delahunt said in the hearing, "I share your concerns about the Chinese government, especially in the area of human rights. Its record in terms of human rights, it's truly been abysmal. And what has happened to the practitioners of Falun Gong, is particularly appalling. My home city, which is Quincy, Massachusetts, has a very large Asian population. There is a large group of Falun Gong practitioners among that specific community. They are extraordinary people. They are warm, they are compassionate. They make extraordinary contributions to my city and to the region.

"I review the CCP's contempt to the rule of law that leads to corruption and waste. Corruption undercut all the economic gains China has made in the last several years. Unless China couples its transition to capitalism, with moves towards democracy and free expression, and human rights, a genuine commitment to human rights, it will never ever able to reach its full potential. And the tragedy is that Chinese people will pay the price."

CCP's double strategy in the persecution of Falun Gong

Dr. Kirk C. Allison, Director of the Program in Human Rights and Health, School of Public Health; Associate Director of the Program in Human Rights and Medicine, Medical School, University of Minnesota, said, "My concern is general as I am not a Falun Gong practitioner. Since July 1999 the systematic persecution of nonviolent Falun Gong practitioners constitutes the single greatest concentration of human rights violations in China against a specific group since the Cultural Revolution. A program of ideological eradication has been systematically pursued under a double strategy: Publicly with high visibility in terms of state propaganda, but hermetically in actions of detainment and sanction outside conventional judicial processes. The systematic program of ideological eradication of Falun Gong coincided with an inexplicable increase in whole organ transplantation, and international organ transplant tourism to China. This raises the question of the organ source.

"Concerning Falun Gong practitioners as nonvoluntary victims, the most compelling evidence has been compiled by David Kilgour and David Matas in the Report into Allegations of Organ Harvesting of Falun Gong Practitioners in China of July 6, 2006."

The four witnesses called on the US Congress and administrative branch to take all opportunities to raise the organ harvesting issue to Chinese government leaders and take concrete steps to stop the atrocities and the persecution.

"Some of the others:

"#3-Independent human rights organizations should conduct their own investigations as to whether the allegations are true.

"#11-All detention facilities, including forced labor camps, should be open for international inspection by the International Committee of the Red Cross or other humanitarian organization."

Mr. Zhang called on Congress to pass a resolution to deny entry of all Chinese officials and doctors who participate in the persecution of Falun Gong and organ harvesting from living Falun Gong practitioners. If they enter the US, they would be brought to justice.

Mr. Matas suggested that US Congress Representatives urge the United States and other countries to request China to answer questions from UN special Rapporteur on torture and solve the problems.

Congressman Rohrabacher said that if he would be Chair for next term, he would hold hearings on the organ harvesting issue. Besides inviting US government officials, medical doctors would also be invited to answer questions.