Falun Gong practitioners in Ankara were invited by the Artists' Association to host a Falun Gong introductory forum on September 30, 2006. Participants were from various backgrounds, including artists, writers, teachers, anchors of radio stations, businessmen, government officials, retirees and homemakers. 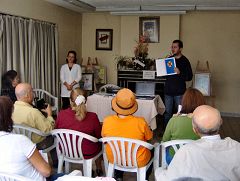 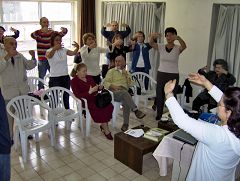 Invited by the Artists' Association, practitioners in Ankara hosted a Falun Gong introductory forum. In the forum, on-site exercise instruction was offered to the participants.

Four Turkish practitioners gave speeches at the forum to introduce Falun Gong, talking about the benefits that Falun Gong has brought to mankind and the beneficial changes they have personally experienced in their minds and bodies. A practitioner read two translated articles about personal cultivation experiences, which were originally written by practitioners in China for the Clearwisdom website. Forum participants asked many questions, such as how they could start cultivation practice, why it is recommended to read the book Zhuan Falun, what Falun is and whether there is any relationship between the swastika pattern and the Nazi symbol. Practitioners provided detailed explanations to all of the questions one by one.

The practitioners also provided an on-site demonstration of the Falun Gong exercises. Many participants learned the exercises right away. Several of them asked for the schedule of the nine-day lecture course, left their contact phone numbers and took Falun Gong introductory pamphlets. Practitioners highlighted the fact that improvement of one's nature is the most crucial aspect of cultivation, because Falun Gong's main goal is not to cure illnesses for people, but to provide a cultivation method, which is suitable for people of various ages with different physical conditions.
A participant asked why learning Falun Gong could be free of charge. His question aroused enthusiastic discussion among the participants, so that the forum had to be extended for more than one hour. Since almost nothing in the world nowadays is free, it sounded very unusual or even suspicious to them that learning Falun Gong is completely free.

A Turkish practitioner gave a detailed response. She said, "Falun Gong cultivation is very pure. No matter whether it is learning the Fa, practicing the exercises, or cultivating our nature, practitioners help one another. In my life, I have never come across something that has nothing to do with money. Falun Gong makes me feel relaxed and purified. More experienced practitioners always help us and never ask for anything in return. As a result, I rid myself of negative interpersonal relationships. In the past, money complicated my interpersonal relationships. Because of my concerns about money, I had to take precautions against or keep away from certain people. Consequently, very often I offended others unwittingly. Life was really tiresome. However, Falun Gong practitioners are so truthful, so compassionate and tolerant. 'Truthfulness, Compassion, Forbearance' are exactly the principles that I should follow in my life. After starting Falun Gong cultivation, I have been trying my best to assimilate to these three principles. My physical health has also undergone remarkable improvement."

Another western male practitioner said, "I am perfectly healthy. So, curing diseases is not the reason why I want to learn Falun Gong. The fundamental reason is that I feel that the cosmic principles as revealed by Falun Gong are very right. As long as people conform to the cosmic principles of 'Truthfulness, Compassion, Forbearance,' it will be the most upright because human beings belong to the cosmos. This can even be explained scientifically."

A western female writer said, "I think the cultivation of mind and body should be started from child-hood because it is the most magnificent. If we would do so, our society would not be like it is today."

Another western female practitioner said, "I suffered from several ailments and felt weak all the time in the past. The torment caused by diabetes made me lose my temper frequently. I was so irritable that my family life was in constant tension. After practicing Falun Gong for merely several days, I felt that walking became so relaxed, as though I were flying. The fatigue that bothered me in the past no longer exists. I also understand the importance of cultivating my nature and tolerance. Not only does cultivation bring tranquility to me, it also brings peacefulness to my family. My children and my husband all said that I have totally changed. I sincerely thank Falun Gong and Master Li. The principles of Falun Gong are extraordinary. This is why I am standing here to share my experience and recommending that you learn Falun Gong."

A Turkish western practitioner, who is also a businessman, said, "Curing diseases is not the reason why I wanted to learn Falun Gong, either. My wife started cultivation first and she introduced me to Zhuan Falun. I was highly convinced by the principles of 'Truthfulness, Compassion, Forbearance.' When I deal with business, I know I have to value virtues. As a result, I begin to consider others. At times, I am willing to sacrifice my own interest in the consideration of the general situations or others people's interests. But my heart remains calm. In contrast, in the past I would have taken selfish measures to pursue personal interest. When I think of others, my heart is filled with happiness. I am more willing to behave as a good person and provide more help to others. I feel I am living an honest life. I also have become more tolerant and understand others' difficulties. This is what I could never do in the past. Furthermore, I have never caught a cold after practicing Falun Gong. During these years, I have never been stricken by any sickness. I feel very energetic now. In the past, I always felt tired even though I was not sick."

The introductory forum ended with peaceful music and the participants left reluctantly. The atmosphere was so sincere and harmonious. People said good-bye to one another, hoping to meet someday in the future.