The young girl's name is Zhu Xiuyun from Aobao Village, Hujietumo Town, Taikang County, Daqing City. She was working outside of her hometown and heard news that her father, practitioner Mr. Zhu Yanghe, was arrested, and sentenced to prison and that her home was raided. She could not understand why all of this took place. 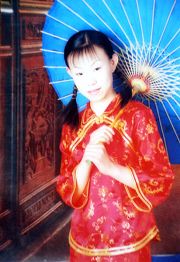 Xiuyun knows that her father is a simple farmer. After years of hard labor in the field, he had developed many ailments. He had problems with his kidneys and stomach. He suffered enormously from his illnesses, and his family suffered the financial burden of his treatment on an already a meager income. After he began practicing Falun Gong, all of his illnesses went away. He abides by the principle of "Truthfulness, Compassion, Forbearance," and thinks of others ahead of himself. He was well respected and liked by those who know him, so why was a good person like this arrested?

After her father was arrested, the whole village was furious. When the villagers found out that the CCP was harvesting Falun Gong practitioners' organs for profit, they were even more worried. Over 200 villagers signed a petition to appeal for her father's freedom. On August 19, 2006, Zhu Xiuyun went to the county courthouse with an appeal letter. The courthouse contacted the head of the county 610 Office, Li Shilin, who called the county police station. Over ten police officers showed up and arrested the young girl without any documentation or just cause.

When Zhu Xiuyun's mother found out that her daughter was missing, she looked for her for days. After she found out that her daughter had been illegally arrested by the police, she went to the County Government Office, the People's Representative Office, and the Political Legal Bureau to ask to see her child. Tang Huaijun from the Political Legal Bureau told her that her child had broken the law because she accused Li Shilin of abusing his power. Her family then realized that Zhu Xiuyun was being illegally detained and held in a county detention center.

Zhu Xiuyun's 70-year-old grandfather and grandmother were extremely worried after they heard the news. They went to the county to see their grandchild and were detained for two days.

Li Shilin, the head of the 610 Office, is a local bully. His brother, Li Shiyu, is the director of the Hujietumo Town Police Station, Taikang County. Over the years, he has abused his power and committed all sorts of crimes. He was accused of seizing a gas truck, fining the truck driver, and selling the gas for his own profit. When he was building his house, it was said that he stole other people's bags of straw for his own use. In order to deceive the public to cover up his actions, he had his father-in-law bury the bags in a ditch. His father-in-law did not understand, so instead he put all the bags on the ground to dry out. Li was furious at his father-in-law and kicked him out the door. Because Li persecuted Falun Gong practitioners and gained a reputation for being cruel, he became the head of the county 610 Office.

Under the manipulation and instigation of Li Shilin, teenager Zhu Xiuyun was arrested and detained and sentenced to three years in Heilongjiang Province Women's Prison.

Main perpetrators in the persecution: