New Zealand: Clarifying the Truth During the Holidays (Photos)

Whangarei is a city in North Island, New Zealand, two hours from Aukland. The residents there, including many Maoris and a considerable number of immigrants from the United Kingdom and other areas, are pure and natural. During the 2006 New Year holidays, practitioners from New Zealand visited Whangarei to promote Falun Dafa and clarify the truth of the persecution to local people and tourists. Reporters from local media, including Whangarei Leader and The Northern Advocate, covered the event.

While clarifying the truth, practitioners were often asked these questions: Do the atrocities committed by the Chinese Communist regime have anything to do with New Zealand? How can people from New Zealand can help to stop the persecution?

Seeing photos which document how practitioners are brutally tortured in China, one man even held a practitioner and cried out. He said that the persecution, which he had just then learned about, made him so sad. A British resident who immigrated to New Zealand in 1963 had a deep understanding about Communism. He said that there was also a communist party in New Zealand. Fortunately, it had never been able to grow big as local people could not accept them. Another gentleman from Scottland said that he had some understandings on how evil Communism was. However, he was still shocked when he saw the posters that disclosed the brutality of persecution.

A little girl and her brother learned the exercises attentively while their mother was watching nearby. 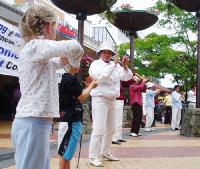 “New Zealand: Traveling to Northland for the Holidays, Practitioners Clarify the Truth and Introduce Falun Gong”