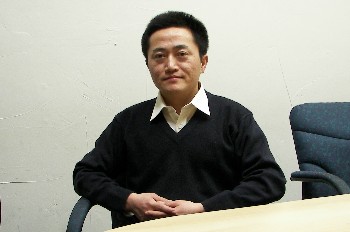 Dr. Charles Lee, who returned to America on January 21, 2006, after being in jail in China for the last three years. He suffered physical torture and extensive psychological abuse. (The Epoch Times)

ET: Why were you arrested in China?

Dr. Charles Lee: I was arrested because I intended to tap into the state-run media to broadcast videos that expose the persecution of Falun Gong.

ET: Tell us about the trial.

Dr. Lee: The trial was conducted in such a way that I was denied every possible legal right. I have evidence which can prove my innocence and they did not allow me to present it. I tried to defend myself, but they did not allow me to do that, especially when I was talking about the reasons, why I was trying to reveal the truth of the persecution. They interrupted me many times; whenever I tried to speak, they would stop me. So I never got a chance to defend myself. And no evidence whatsoever was presented from me, even though I requested it many times.

So from a legal point of view, this trial is totally, utterly unlawful and unacceptable.

ET: How were you treated?

Dr. Lee: When I was arrested in the very beginning, in Canton, and then was transferred to Guangzhou, they tortured me with handcuffs, which cut into my flesh to the bone; it was extremely painful. They did not allow me to sleep for 92 hours in total. They used the handcuffs as a tool to torture me. They pulled my arms upward, from the back, so it was extremely painful and I could not move at all. If I moved at all, the pain would get worse.

I conducted a hunger strike from the very beginning on January 22, 2003 until February 10--18 days in total.

I still insisted on practicing Falun Gong, so they handcuffed me on March 27, after the trial; the trial was March 21. They handcuffed me, and I started a hunger strike on the 30th, one more time. The reason I started was because I wanted to write an appeal letter, because the trial was unlawful, and I had to make three copies, plus one for myself, thus I had to write four copies of the appeal letter, and I was handcuffed.

On May 9 my appeal letter was denied, and I started a hunger strike again, because this was totally unlawful, so I wanted to protest again. After that, according to their law, that was the final decision, you had to be thrown into prison, so then I was transferred to Nanjing prison on the 12th of May. I was still doing a hunger strike to protest, and then on the 14th of May I received a phone call from the U.S. consulate and I said, "I have some materials over here, I want to give them to you. I will stop the hunger strike today, and if you do not get the materials in two weeks, I will start the hunger strike again." Because those materials are extremely important. They recorded all the details of the trial, what they (the authorities) said, what they did, why they did not allow me to do this and that, and also my appeal letters and how they tortured me. After two weeks, they did not send what I wanted, so I started a hunger strike again.

The forced feeding was extremely painful, and I resisted their treatment. So they just poked the big, thick tube into my nose and into my stomach. It was so irritating that I threw up several times. It was crazy--I was screaming as it was so painful. The cameraman, who was green--just from the police academy--he fainted, right at the scene. On June 2, the U.S. consulate received all the materials I wanted to give them.

They still had my Zhuan Falun [the central text for Falun Gong practitioners], and I said you need to give me this Zhuan Falun, or I won't stop the hunger strike. They started the force feeding again on June 3. Before they did, they yelled, "Taste the power of the people's democratic tyranny!" They were full of exultation before they were going to torture me, like it felt so good. They left the tubes in my nose, which I pulled out myself.

They used the forced feeding to torture me, actually.

They had these so-called group study sessions, anti-Falun Gong group study sessions. I was surrounded by 15 people, yelling at me. Falun Gong is this and that, so crazy, why do you believe in these things... calling me this every day. So I started a hunger strike again, because that was so bad. I was protesting against the torture.

I started a hunger strike again on July 14 to 18, and at that time they left the tube inside of my nose for 33 hours, and they had all of my body tied up on a bed. 33 hours I lied there without moving; it was extremely painful--agony.

Then came the brainwashing. From August 2003 they started to force me to watch the videotapes. Every day, it was three hours of videotapes. Then they had condemnation meetings on Falun Gong, three-hour sessions; then the policemen would come and talk to me. This continued for three to four months, and they didn't see enough results, so they changed their strategy.

Starting at the end of 2003, they forced me to do slave labor, to make shoes. The shoes used a sort of industrial glue that contains benzene; it's very toxic and irritating, and I felt short of breath and had a headache, that sort of thing. The other thing is, I always tried to refuse to work, because I was innocent--I should not be doing this. They forced me to stand for 16 days, from morning to evening, stand in front of other prisoners; they verbally attacked me, insulted me, that kind of thing. If you didn't stand straight they would kick you and push you.

They tried to force me to confess to the crime, by using forced sitting. They say you have to sit there and think about your wrongdoings yourself, like repentance. You're forced to sit there, just sit there in a fixed position. The longest time was 48 days straight, with my heart problem surfacing as a result. After breakfast it was 7:30 a.m.; then you start sitting there, and at lunchtime you have lunch. Then you start sitting again after lunch, then have dinner, and then come back and sit there for some time and watch their CCTV (China Central Television). Every hour they gave me five minutes to walk around in the cell. The stool was this size [gestures to describes a stool less than a foot high, less than a foot wide, and around six inches deep], you sit there and then your bottom develops this hard callus--it's extremely painful, and your back is also very painful. I was exhausted for such a long time.

After maybe two to three weeks, my brain worked very slowly. When the consulate came, I found it very difficult to speak; somehow, my brain didn't work anymore!

They have something for you all the time, like brainwashing sessions. It's always brainwashing, from the very beginning to the very end. They say you are a prisoner, you have committed a crime, that you have to be punished.

How was your belief in Falun Gong targeted?

It was very, very hateful. When I was arrested in the airport, one policeman was trying to grab Zhuan Falun from me, he said, "You're still having this Zhuan Falun!" He was grinding his teeth, full of hatred.

They try to do everything to insult you, to disdain you, to say you are mentally ill.

What was the worst part of being in jail?

I think the worst part is that I never had time to see my mother, to do anything for her. She died already, one year ago. Anything that happens to me, I can suffer and after some time I can still recover. But my mother died, and I can do nothing at all.

Is there any message you would like to give to the world about the persecution of Falun Gong?

It's extremely chilling; actually, if I think about the past, it was truly like hell. Sometimes we aggrandize something by saying it is like hell, but this was literally hell. They watched me all the time; you're under constant pressure. They give you the sense that there's no escape, no way out, that you're always under their control.

It's truly hell. I wish everybody in this world could know the truth about how the persecution goes. If you kill someone instantly, they don't suffer much pain. But if you torture people like this, and they give you no hope to get out, that's worse, much worse than death. Actually, sometimes we had arguments with those inmates who were watching me. I said, "You cannot kill me, right?" They answered, "Yeah, but we can make it worse than death." That's what they actually said. So they know how to torture people, they know how to let you suffer to the extreme. It's worse than death. This, they make you suffer--endless suffering, and you don't see the end. That's extremely vicious.