(Clearwisdom.net) On August 27, Falun Gong practitioners were invited to participate in a health expo in Saue City, Estonia. Because the expo was held on Saue City Day, many residents of the city came along to the event.

Practitioners demonstrated the five Falun Gong exercises. The beautiful music and peaceful movements attracted much attention. A lot of people asked where they could learn the practice. While discussing Falun Gong, practitioners also informed the people of the brutal persecution in China by Jiang Zemin and the Chinese Communist Party for the past six years. Fliers were readily taken by those who wanted to know more. 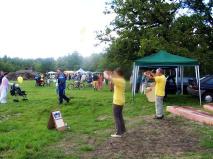 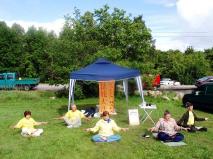 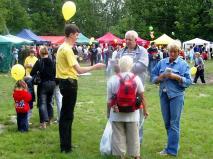 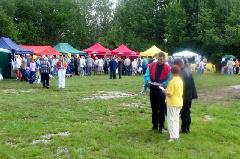 Visitors are happy to learn about Falun Gong.

It rained from time to time. Many people ran into our tent to get out of the weather. As they were sheltered from the elements, they also took our fliers and paper lotus flowers.