Falun Dafa practitioner Ms. Liu Shufen is illegally detained at the Women's Prison in Heilongjiang Province. She has been on a hunger strike for over three months protesting the persecution, and her life is now in danger. During the Chinese Moon Festival, her mother left her bed-ridden spouse at home to go visit their daughter. However, her visit was denied by the prison authorities.

Ms. Liu Shufen has experienced a series of persecutions since October 1999 for practicing Falun Dafa and telling people the truth about Falun Dafa. She has been illegally fined, arrested, detained, and forced to leave home and wander about to avoid persecution. In mid-May 2002, Liu was arrested by police at the place where she was staying at the time. Later she was sentenced to eight years of imprisonment by Ranghu District Court in Daqing City, Heilongjiang Province. Liu is being severely tortured in the Women's Prison of Heilongjiang Province. The police locked her in a small cell, tied her up spread eagle, hung her up by stretching her legs, handcuffed her hands behind her back around the clock, and hung her up by the handcuffs. They deprive her of sleep and don't let her use the toilet. From March 15, 2005, to the beginning of August, Liu Shufen was confined in a small cell. She started a hunger strike to protest the persecution on June 6, 2005, when she was already very weak, and is still on the hunger strike now.

When Liu Shufen was at home she took good care of her parents. She was born when her father, Liu Mochen, was already quite elderly, and her father loved her very much. The 78 year-old man has been confined to bed for a long time and cannot take care of himself. He often looses control of his bowels. Now, in addition to his bodily suffering, he is living with the pain of being separated from his beloved daughter. Whenever he sees someone, his first words are, "Do you know when my daughter will be back?"

In 2002, Liu Mochen was very ill and couldn't get up from bed. When he heard that his daughter had been severely tortured in prison, he insisted on taking a cab to the prison to get his daughter back even though it could endanger his life. When he got out of the cab, he couldn't walk one more step and crawled into the gate of the prison. Even so, the police didn't let him see his daughter. Liu Mochen survived after spending twenty days in a hospital. 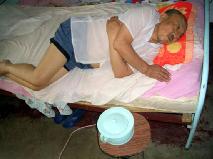 Liu Shufen's mother, Wang Yanxiang, is short and slender. Although she is overloaded with the task of taking care of her husband, she also has to endure the pain of having her beloved daughter suffering in prison. During the Moon Festival, (a time for family reunification) when she learned that her daughter's life was in danger due to the hunger strike, she was anxious to see her daughter and asked someone else to take care of her husband. She boarded a long-distance bus to Harbin City Prison, but was stopped at the gate. When she asked to see the head of the prison, he wouldn't see her. She tried to make phone calls to him, but no one answered the call. When Liu Mochen heard that his wife couldn't get any information about his daughter, he sobbed and was unable to talk.