Mr. Jiao Long, 45, from Baiquan County, Heilongjiang Province, started practicing Dafa in 1996. His whole family also practices. Even after the persecution of Falun Dafa started on July 20, 1999, his family remained very diligent and steadfast in Dafa. In July 2000, his wife Zhang Liqun went to Beijing to appeal for Dafa and was arrested at the Harbin train station. She was illegally sentenced to a one-year term in the Shuanghe Forced Labor Camp. Mr. Jiao took over raising their two high-school-age children.

In November 2001, Mr. Jiao was forced into homelessness and had to leave the two children at home alone. His wife Zhang Liqun did not get released until August 2001 because her sentence was illegally extended an additional month and a half. Two months after she was released, she was arrested again while distributing truth-clarifying material to the farmers in the county and was sentenced to three more years in a forced labor camp.

Around 1:00 p.m. on December 11, 2004, Mr. Jiao and fellow practitioner Zhang Bin went to visit another practitioner. As soon as they entered the apartment, a group of police, led by ex-Chief Peng from the Tuanjie Road Police Station and Officer Dong, the Section Chief from the Shaertu District Political and Protection Section, surrounded the whole apartment building. Mr. Jiao and Zhang Bin began clarifying the truth of the persecution to the police and shouted loudly, "Falun Dafa is good!" They also clarified the truth to passing pedestrians. The police sealed the apartment from the outside so that Mr. Jiao and Zhang Bin were confined inside the apartment from the afternoon of December 11 until the next morning at 5 a.m. when they found a way to escape from the third floor balcony.

As Mr. Jiao was climbing down from the third floor he fell and broke his leg. When the police found him he could not walk, so they dragged him by his arms all the way to the police car. The police sent him directly to the Tuanjie Police Department rather than getting him medical attention. When they reached the police department, the police pulled Mr. Jiao out of the car, dragged him into the station and started interrogating him. Officer Dong even kicked his broken leg.

The police eventually sent Mr. Jiao to Daqing Hospital for X-rays, which revealed that Mr. Jiao's leg was fractured in several places. Afterwards, the police drove Mr. Jiao back to the police station but would not let him out of the car because some officials from the city were having a meeting inside. A chief came out of the station and said to Mr. Jiao, "We are going to release you. Do you have any relatives in Daqing? Let them bring you home to take care of your leg."

Mr. Jiao replied that he did not have any friends or relatives there and that he would like to go home alone, so the police called a taxi for him. It cost about 400 yuan. When he was arrested, Mr. Jiao had about 1,000 yuan in his pocket but the police had confiscated it. He then had to pay the 400 yuan for the taxi out of his savings.

Because he did not get prompt treatment for his fractured leg, his leg and foot swelled severely, almost doubling in size. To this day his leg has not properly healed.

Below are photos of Jiao Long's broken leg. 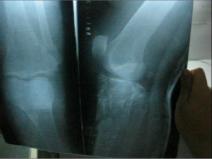 “"This is the Greatness of a Dafa Disciple"”