(Clearwisdom.net) By July 20, 2005, the persecution of Falun Gong, which was started by Jiang Zemin and the Chinese Communist Party, has lasted six years. Persecution, however, will never change Falun Gong practitioners' belief in "Truthfulness, Compassion, Forbearance". On the contrary, with the continuous efforts of the Falun Gong practitioners, more people have learned about the goodness of Falun Gong and the evil nature of the Chinese Communist Party (CCP).

On July 20, 2005, from 12 noon to 11pm, some Czech practitioners gathered in front of the Chinese Embassy in Prague to condemn the persecution and clarify the truth to the people and the media.

The people living in the houses opposite the embassy were the first to learn the truth of the persecution. They then let practitioners use the wall of the complex to hang truth-clarifying materials. During the process of hanging up the banners, a photographer from the Czech TV Station also came and said, "The media is here to support you!" He filmed the torture exhibition pictures as well as the practitioners' meditation.

Before 3 pm, many people came to the embassy to get visas or to renew their passports. The practitioners used this period of time to hold a press conference and talk about Falun Gong practitioner Ms. Gao Rongrong, whose face was cruelly disfigured by torture and who was later killed. People listened carefully. One photographer from a local newspaper said, "I'm sorry that this kind of thing is happening. I hope your efforts will get results." 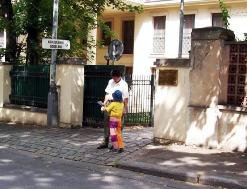 A little practitioner clarifies the truth to a Chinese embassy official

Two girls aged seven and eight painted many pictures entitled "Falun Dafa is Great" at home. When a Chinese officer came out, one of the younger girls happily presented one of her works to this officer who refused it rudely. However, she still put the painting into the embassy's mailbox later on. 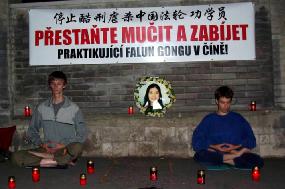 That night, the practitioners sat quietly during a candlelight vigil and sent forth righteous thoughts. We hope the righteous belief in "Truthfulness, Compassion, Forbearance" can awaken these Chinese officials' consciousness.

“France: Practitioners in Paris Appeal For an End to the Persecution (Photos)”

“My Understanding of Negating the Old Forces”