(Minghui reporters Zhou Rong and Fang Hui report from Taipei) On the weekend of August 12, Falun Dafa practitioners from Taoyuan, Hsinchu, Jungli and various cities and counties of Taipei as well as Penghu Pescadores gathered at the Jian Tan Overseas Youth Activity Center in Shihlin, Taipei to take part in the 2005 Falun Dafa Experience Sharing Conference of Northern Taiwan. The conference lasted for two and a half days. Practitioners participated in group exercises, group Fa study and experience sharing. They shared extensively in line with The Three Things that Teacher Li Hongzhi asked practitioners to do, namely cultivate ourselves well, clarify the truth and send forth righteous thoughts.

Ms. Zhang, one of the organizers, said that originally the annual Falun Dafa experience sharing conference of Northern Taiwan was held at the Taipei National Military Hero Auditorium. After the latter half of 2001, the number of participants increased dramatically. Since it exceeded the capacity of the National Military Hero Auditorium, the venue was changed to the Jian Tan Youth Activity Center. About 2000 people participated in this experience sharing conference. Among them nearly 170 were little disciples. The youngest was only two years old.

Serene expression of a little disciple

Every practitioner cherishes the opportunity to share in learning, share in cultivation and to make progress together.

One elderly lady from Tao Yuan said she always looks forward to opportunities like this, so she comes to the conference every year. Although she is busy looking after her grandchildren, she always manages to come.

Besides the veteran practitioners there were many new faces. Many of them came with the entire family. Some families came with three generations. The children attended the children's group, parents joined the adult group and the grandparents participated in the Taiwan Dialect group. Every one of them melted into the Fa and shared their experiences to their hearts' content.

One family of three that had been practicing Falun Gong for less than ten days came to the experience sharing conference. The couple learned about Falun Gong from the Internet. They went straight to the practice site to learn the exercises. Their daughter Yuci, who is about to go to the fifth grade in a primary school, also came to the conference and joined the children's group. She is a very quiet girl and likes to read books. She has already finished reading all the lectures Teacher gave in various places. She also asks her parents to wake her up every morning so that she can go to the practice site to practice the exercises with them.

Practitioner Ms. Hong Chulan is disabled. In order to attend the conference, she had to ride her wheelchair for two hours from Jungli to Jian Tan together with her daughter. She looked a little tired but was in high spirits. She said she gained a great deal during the two days of sharing. She said that she had found her shortcomings and her gaps. For example, her inferiority complex and her fear made her feel regretful that she felt inferior to others. She realized that she must come out to share with others. Only by doing so could she keep up with the process of Fa-rectification.

She said that she had overcome many obstacles both physically and mentally when she first started to practice Falun Gong. At the very beginning, the two handles of her wheelchair could not be lifted up to assist her in doing the exercises. She bought another chair, and she brought the chair to the practice site every day so that she could sit on the chair and do the exercises.

Morning exercises on August 14 (Ms. Hong in her wheelchair) 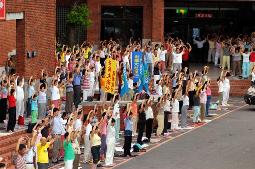 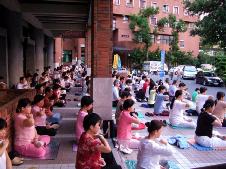 One lady used to suffer from calcification in her heel. An operation was scheduled for her to have her heel removed. After she practiced Falun Gong for three days, the doctor said no operation was needed.

A taxi hit one practitioner who was riding a motorcycle. She was thrown off the cycle. The X-ray showed no fractured bones and the practitioner did not suffer from a cerebral concussion either. After about 20 days of practice, the practitioner recovered without taking any medication.

Other practitioners used to suffer from insomnia, asthma, and a sore back. After they practiced Falun Gong, however, all their illnesses disappeared and they all felt energetic, as if they changed into a new person.

Study the Fa, Cultivate Xinxing and Let Go of Attachments

Besides talking about the physical changes, the participants also talked about the importance of studying the Fa and cultivating xinxing.

One practitioner talked about her experiences in memorizing the Fa. She said that after she witnessed the changes in the xinxing of another practitioner who memorized the Fa, she began to recite the Fa whenever she had time. She has recited the Fa for several months and said, "When my mind is filled with the Fa, then I can measure myself with the Fa all the time."

One elderly practitioner said that when memorizing the Fa, age should not be a problem. She said when she went to China to share with the local practitioners, before the suppression of Falun Gong, she was so touched by the way they studied the Fa. They were not reading but reciting the Fa together. She cited a practitioner for example to encourage other practitioners to recite the Fa. This lady was over 80 years old and could not read or write. However, she was able to recite the entire book Zhuan Falun.

Other practitioners talked about the process of looking inward when confronting conflicts.

One mother said that after she learned Falun Gong she wanted to pass it on to her child. No matter how hard she tried, she failed. Then she became very angry and asked her child why he refused to learn such a good exercise. Her child replied, "You have learned the exercises, but you have not changed one bit." She was really shocked on hearing this and realized that she should use her words and actions to validate the Fa. After she corrected herself, her child began to accept Falun Dafa.

As for sickness karma, the participants enlightened that it was not only a test for the practitioners concerned, but also for their fellow practitioners and family members. Only when they had very strong righteous thoughts, firmly believed in Teacher, were diligent, and cultivated solidly as well as let go of human notions could they pass the tests. 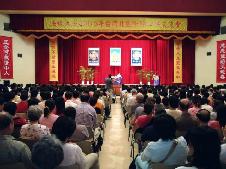 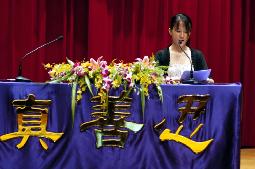 Mr. Cai Souren and the three members of his family had just returned to Taiwan after spending one month on a summer vacation in Manhattan to clarify the truth. When they first arrived in New York, they moved into the dormitories with other practitioners from Taiwan. Seven females shared one room and one bathroom. At first, his wife and two daughters were not used to that, so a lot of human notions appeared. They complained from time to time. In their minds they were thinking about when they could go back to Taiwan and how they could endure that for one month. Such a state of mind, of course, affected their truth-clarification activities. We all understood that we must improve ourselves through studying the Fa and sharing with other practitioners.

He also mentioned his role in the anti-torture exhibit during that month. He played the role as an evil policeman who was persecuting Falun Gong practitioners. At first he felt a bit uneasy to just stand there straight like a security guard. He also wanted to maintain his appearance. Sometimes he would use the reflections from the shop windows to check and see if he looked OK. He realized that he was rectifying himself. Later on through sharing with other practitioners who acted as evil policemen and the enlightenment from his Fa study he broke through a lot of psychological obstacles. He also took the opportunity when he acted as a policeman to recite Lunyu. In one hour he could recite Lunyu about ten times. He found that many bad thoughts were eliminated automatically during the process of reciting the Fa. Therefore the number of bad thoughts was getting less and less.

A practitioner who works in the banking and financial sector said that May and June of every year are the busiest months for shareholders of the Taiwan listed companies to have meetings. It is also a good opportunity for the small shareholders to talk to the company management about the unstable political situation and how it might lead to investment risks. He said he was good at writing but dared not speak in public. At the first meeting, although he was reading a script, he was still trembling. When he went to the last meeting, he was able to clarify the truth freely. The pace of change was beyond his expectation. During the process, he realized that in clarifying the truth to save sentient beings, we should use everyday people's techniques wisely and strengthen basic skills on top of our righteous beliefs and great compassion.

One young female practitioner talked about how she overcame the comfort seeking mentality and the demon nature of laziness to walk on the path of cultivation. By the end she said that she did not have the experience of vigorously validating the Fa like many other practitioners, nor did she have any heroic and moving stories, or a solid foundation of Fa study, but she had a heart for helping those fellow practitioners who still had difficulty in stepping forward. She said that Teacher has always given her the chance to keep up with other practitioners. She hoped that she would study the Fa more diligently and do a better job in clarifying the truth in order to keep up with the process of Fa rectification.

Psychiatric Doctor Li Zhengxun discussed how he had passed three tests of sickness karma, from which he learned a deep lesson. He said that although the tests appeared in the form of sickness karma, weren't they the opportunities for him to improve his xinxing? He also said that while suffering from the pain of sickness karma, he was able to enlighten from the Fa that he still had many shortcomings.

Practitioners also shared their experiences of phoning people in China, the staff in the forced labor camps and in saving the orphans of Falun Gong practitioners. They felt that sentient beings were getting more rational and longing to learn the truth. They realized that it is time for us to step up our truth-clarification in a more painstaking manner.

The two-and-a-half-day experience sharing conference concluded successfully at 6 p.m. on August 14. When practitioners walked out of the conference hall, they were all full of happiness. They all expressed that they would join group Fa study more. They thought that experience sharing helped them to find their own shortcomings and gaps. They would therefore use their time to cultivate even more diligently, and walk every step steadfastly and righteously.