(Clearwisdom.net) In order to welcome Falun Gong practitioner Ms. Ko Sung-nyo (Chinese pinyin: Gao Chengnu) who was recently released from a Chinese labor camp and to express gratitude toward Korean Parliament members who had supported and helped rescue Ms. Ko to Korea, the "Ko Sung-nyo Rescue Committee" sponsored a "welcoming party" for Ms. Ko on July 28, 2005 in the Korean Parliament's Honored Guests' Cafeteria. 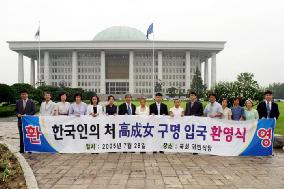 "Ko Sung-nyo Rescue Committee" in front of the Korean Parliament

On that day, both Ms. Ko Sung-nyo and her husband, Mr. Kwack Byung-ho, were very happy. They talked about their life in Korea and expressed their gratitude towards all the people who had helped them. 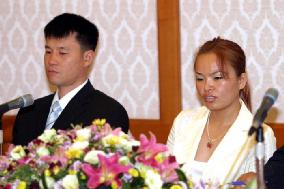 A representative of the 24 Parliament members who participated in the rescue of Ms. Ko Sung-nyo, MP Li Yuanrong said in his speech, "In more than 80 countries of the world, including Korea, Falun Gong's peaceful cultivation environment is protected. However, only China bans Falun Gong." "In order to force Ms. Ko Sung-nyo to give up her practice of Falun Gong, the Jiamusi Forced Labor Camp employed various kinds of methods to persecute her. During that period of time, Ms. Ko's health was in critical condition. However, she resolutely practiced her cultivation with unyielding courage. We highly recognize her lofty spirit and courage to obtain her freedom to cultivate through nonviolent means." MP Li continued, "Starting from one's resolute faith and firmly denying the authorities' unjustifiable interference with one's freedom of cultivation practice once again shows the victory of the noble human nature." 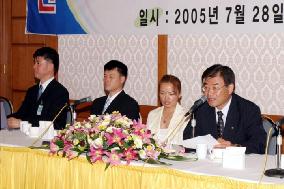 MP Li Yuanrong, representative of the 24 MPs participating in the rescue of Ms. Ko Sung-nyo, addresses the party

Since Ms. Ko Sung-nyo was arrested and imprisoned in the Jiamusi Forced Labor Camp for her practice of Falun Gong in May, 2004, various kinds of activities to rescue Ms. Ko have unfolded in Korea and numerous people have participated in the rescue effort.

In Korea, more than 240,000 people signed a petition requesting the release of Ms. Ko Sung-nyo. Seventy-three assembly committees at municipal and provincial levels and some social groups passed resolutions to urge the Chinese authorities to set Ms. Ko free. In particular, 24 elected Korean Parliament Members formed the "MP Rescue Committee to Urge the Release of Korean Citizen's Wife". The MPs visited the Chinese Embassy in Korea to deliver a letter to Chinese President Hu Jintao to demand the release of Ms. Ko Sung-nyo. 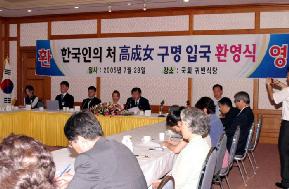 With the progress of the nationwide rescue campaign, on May 13 this year, Ms. Ko Sung-nyo was finally released from the Jiamusi Forced Labor Camp. Although she was set free, she was unable to obtain a visa to Korea and the couple was unable to live together.

In order to help Ms. Ko Sung-nyo come to Korea as early as possible, the "Ko Sung-nyo Rescue Committee" discussed the situation with the Korean Consulate-general in Shenyang, China and the office in charge of entering or leaving Korean territory. After learning the truth, these institutes, which originally refused to issue the visa in advance, finally provided positive assistance. On July 8, two months after her release, Ms. Ko obtained her visa and arrived in Korea on July 20.

“The World Organization for Human Rights: Those Who Participate in the Persecution Shall Be Brought to Justice (Photo)”