Taipei: Clarifying the Truth at the National Palace Museum (Photos)

The National Palace Museum (NPM) in Taipei is home to one of the foremost collections of Chinese art in the world. The extensive exhibit includes bronzes, jades, ceramics, lacquerware, curios, calligraphy, paintings, etc. The ages of the collections span over 7000 years. The NPM is a first-class national museum, and is well known worldwide. It attracts many tourists from around the world. Many tourists from Mainland China come to visit the National Palace Museum with admiration. Constant streams of people come here to visit.

In recent years, tourists who came here not only appreciated the priceless Chinese treasures, but they also saw a unique scene. On the plaza in front of the museum, Falun Gong practitioners demonstrated the exercises and distributed flyers. They set up a simple TV system to play video programs documenting Falun Gong's worldwide spread and to show the persecution encountered by practitioners in Mainland China. These Falun Gong practitioners persistently clarify the facts in all weather conditions in the hope that more kind-hearted people will learn the truth about the practice and work together to condemn the severe persecution against Falun Gong in China.

On the morning of July 28, 2005, more than a dozen Falun Gong practitioners from Sanxia, Banqiao, and Shulin joined the truth-clarification activities at the NPM. The landscape surrounding the museum is quite beautiful, and the environment is serene and spacious. Practitioners collaborated with each other and set up the TV and tent, hung banners and displayed materials. In a short while, everything was set up and in good order.

Tourists came successively. Some were Westerners, and some were from Asian countries. As soon as they entered the plaza, they were attracted by the group of Falun Gong practitioners, who were dressed in yellow shirts. Under clear skies and bright sunshine, practitioners' yellow shirts and their ordered practice of the Falun Gong exercises were quite eye-catching. Many tourists took pictures of them as souvenirs. 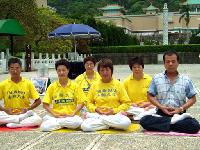 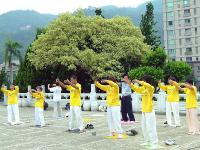 Many foreign tourists were very happy to accept the brief introductory materials handed to them by practitioners after they took pictures.

When some people from a Mainland China tourist's group witnessed the scene they shouted, "It's Falun Gong!" Then many mainland tourists took photos. They couldn't believe that people could openly practice Falun Gong. Some people from the tourist group stopped and watched the truth-clarification video programs. In the end, some of them took the initiative to ask for more information materials.

It was a nice day. The sky was clear and the sunshine was bright. Practitioners practiced the Falun Gong exercises with peaceful and serene expressions on their faces under the scorching sun. A Taiwanese tourist stood and watched for quite some time until a practitioner went over to give him some introductory information. He said that he was amazed by practitioners' strong concentration. In such hot weather, they were still able to persist. He said that he was really interested in the practice.

A lady who came with her little daughter was shocked after seeing the photo showing Falun Gong practitioner Ms. Gao Rongrong's disfigured face after being persecuted. She came over to ask for more information. A practitioner patiently explained the persecution facts to her. Her little daughter also listened attentively. After learning the facts, the lady felt very sad and tears emerged from her eyes. She could not understand why a lady who just wanted to be a good person through the practice encountered such inhuman persecution by the Chinese communist officials.

Falun Gong practitioners' persistent truth-clarification at the NPM has allowed numerous people from around the world to learn about the persecution facts. Even more so, many people have started practicing cultivation in Falun Gong as a consequence. Staff members of the NPM are also moved by practitioners' persistent and selfless efforts. Whenever tourist groups are scheduled to visit the museum, the staff members tell practitioners which country the group is coming from, so that practitioners can prepare truth-clarifying materials in the corresponding languages.

On this day, practitioners practiced the exercises under the hot sun. Their clothes were soaked in their sweat. However, once in a while, there would be a breeze to relieve the heat, as if to encourage practitioners to continue with their efforts in allowing more people to learn about the truth so that "Truthfulness, Compassion, Tolerance" will be spread to every corner of the world.