(Clearwisdom.net) To help stop the Chinese Communist Party's (CCP) persecution of Falun Gong, on July 22, 2005, after holding a parade in Auckland, Falun Gong practitioners held another parade in Wellington and had a rally in front of the Parliament Building.

The parade procession marched through the downtown area, and many people stopped to watch. Practitioners held over 20 banners explaining to people the brutal persecution Falun Gong practitioners have suffered in China. A woman learned about the truth and said, "The CCP is a tiger, it wants to eat people at any time, and we should not think that it is sleeping. Many Western countries take it as a tiger for people to view and appreciate, and many people do business with it. Actually they feed it with money, but it will still turn around and eat people."

At 1:00 p.m., the parade procession reached outside of the Parliament Building, where practitioners held a rally. Two practitioners talked about the brutal persecution they personally experienced in China.

United Future Party leader Peter Dunne said in his speech at the rally that the CCP's persecution of Falun Gong is not an individual case, "It takes place in the so-called People's Republic of China, and is a systematic persecution of human rights, freedom, and conscience. Everybody, regardless of environment, nationality, background and faith, has an absolute and overwhelming right to their belief, and has the right to express their belief and practice their belief." He appealed, "All New Zealanders should stand with Falun Gong practitioners, expressing our absolute indignation to the Chinese authorities for its allowing the persecution to take place and escalate. And we will try our best to ensure that the Chinese people can enjoy the same basic freedoms, because free people cherish freedom, and cherish independence and human rights."

New Zealand Green Party leader Rod Donald expressed in his speech, "I almost cannot speak. This does not often happen to politicians. This is because I have heard tragic stories of the Chinese government inhumanly suppressing its own people. China is ruled by a cruel dictator, and an autocratic regime that suppresses its own people. China is a kingdom of police, not the People's Republic of China. People should face this point. Too many politicians and too many governments disregard what is happening in China, and since the CCP seized power, it has been going on like this non-stop." Mr. Donald also stated that as a New Zealand MP, he supports Falun Gong practitioners' right to express their own beliefs and opinions everywhere and without fear. He said, "I stand by your side, to urge the CCP to stop the suppression and terror, and stop the persecution of Falun Gong practitioners." 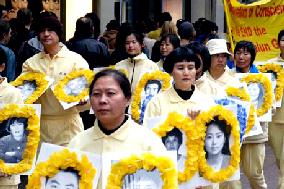 After the parade, practitioners divided into two groups. One headed toward the Chinese Embassy to send forth righteous thoughts, and the other went to Cuba Street in downtown to hold an anti-torture exhibit.

During the anti-torture exhibit, practitioners cooperated quite well, and each did what they should do. Some reenacted the torture methods used in China to persecute fellow practitioners, some handed out truth clarification materials, and some others demonstrated the exercises. Two Western practitioners took turns from beginning to end explaining and exposing the atrocities that are happening in China.q4q 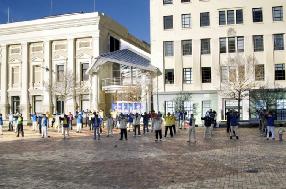 The anti-torture exhibit attracted many spectators. People showed great concern over the persecution suffered by Falun Gong practitioners. They stayed for quite some time and carefully read the content of the display boards and flyers specially made by Falun Gong practitioners for the sixth anniversary of July 20. People also asked practitioners how they could help Falun Gong. Many people listened attentively to explanations that explained that facts. They condemned political circles and media around the world who keep silent about the persecution due to their economic concerns. They expressed their indignation against the persecution happening in China.

A young lady of Chinese origin born in New Zealand said while holding back tears, "For simply practicing such a peaceful exercise, one is tortured so severely! Why have I never heard about it? I can't tolerate it, and I can't let it go on, I support you." Many people said, "We support you! We wish you success!" Such voices were expressed from the bottom of people's hearts immediately on the spot. Three women who look like overseas Chinese came to the anti-torture exhibit site twice to verbally abuse practitioners, and were immediately stopped by the audience. A Western lady said to practitioners, "Don't mind what they said. You are so peaceful, but they are there shouting, this forms a sharp contrast. They are truly making trouble. We support you." One Maori pressed his hand in front of his chest to make Heshi gesture and said loudly, "I'm Maori, I know 'Falun Dafa is great!'"

The activity concluded at dusk. Practitioners were pleased that so many kind-hearted people learned the truth.