(Clearwisdom.net) On Tuesday July 19th 2005, the eve of the 6th anniversary since Falun Gong was banned in China on July 20th 1999, Mr. Georges-Henri Beauthier, a prestigious human rights lawyer, filed a lawsuit on behalf of two Falun Gong practitioners in Brussels. The lawsuit was for the crime of harassment and was filed against China's 610 Office and the responsible Chinese officials including: 610 Office head and member of the Committee of Political and Legislative Affairs Luo Gan, Minister of Public Security Zhou Yongkang, Deputy Minister of Public Security Liu Jing and Minister of State Security Xu Yongyue. The lawsuit has been accepted by the Belgian court. 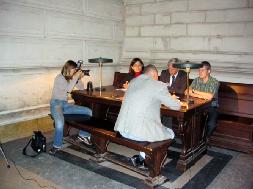 Practitioners in Belgium hold a press conference regarding the lawsuit against the 610 Office.

In early February, Falun Gong practitioners in over twenty countries around the world received harassing phone calls from unidentified sources. In Chinese or English, the voice recording carried the CCP's slanderous propaganda against Falun Gong. The two Belgian practitioners who filed the lawsuit also received these phone calls. In a press conference held at the Belgian court, the plaintiffs gave detailed accounts of the phone harassment.

Between February 2nd and February 11th 2005, one of the plaintiffs received several dozens recorded messages on his mobile phone from unidentified sources. At its peak, eight calls were received in a single day. The content of the harassing calls was a voice recording that defamed Falun Gong. The phone calls also intimidated the recipient to stop practicing. The plaintiff said, "I know the Chinese Communist regime has been monitoring me for a long time. They never approved my visa application for visiting China."

Another plaintiff also received similar recorded phone calls from China. The number of phone calls reached several dozen each day. The plaintiff pointed out that the Chinese Communist regime attempted to harass and terrify her through these phone calls. The reason for the harassment is that the recent publication of a special editorial series called "Nine Commentaries on the Communist Party" by The Epoch Times newspaper has resulted in over 3 million people withdrawing from the CCP and has left the Chinese Communist regime in a panic. As a result, the CCP carried out their harassment.

Mr. Georges-Henri Beauthier filed a lawsuit against Jiang Zemin, Li Lanqing and Luo Gan for crimes of "torture, crimes against humanity and genocide" on behalf of Falun Gong practitioners in Belgium two years ago. He said in the press conference, "Judging from the contents of the voice recording and the measures they resorted to, it is clear that the Chinese Communist authorities have been manipulating things behind the scenes. The Chinese Communist regime has dispatched a great number of spies to foreign countries for espionage activities, including monitoring Falun Gong practitioners and political dissidents. Recently, a lot of them were found in Australia, Canada and Europe."

Mr. Beauthier emphasized, "This kind of harassment violates Belgian law and international practice. It imposes a great challenge against our belief and freedom. This threatening conduct should be stopped, at least in Belgium." When asked by reporters about the prospect of the lawsuit, Mr. Beauthier commented, "It all depends on the Chinese Government and the reactions of the European governments. We look forward to seeing trials in Europe against the continuous human rights infringements in China." So far, there have been over fifty lawsuits filed in thirty-two countries around the world against the prime culprits of the persecution against Falun Gong.

At the end of the press conference, Mr. Beauthier said, "We have filed a complaint against the responsible people who persecuted Falun Gong over here before. The defendants didn't dare to come to Belgium. Not long ago, a defendant was prosecuted in France immediately after his arrival. As a result, the defendant fled from France hurriedly. We will continue to push ahead these lawsuits in Belgium and other countries."

News media, including the Belga News Agency, NTDTV and The Epoch Times all dispatched correspondents to provide coverage of this event.

“Germany: Appealing at the Chinese Consulate in Munich after Six Years of Persecution (Photos)”