(Clearwisdom.net) On July 23, the Third Overseas Young Falun Dafa Practitioners' Cultivation Experience Sharing Conference was held in the Renaissance Hotel in Washington DC. About 300 practitioners, including young children and their parents, attended the conference. The young practitioners' ages ranged from four or five years old to high school teens. Most of them are from across the U.S. Some are from Canada, Europe, Taiwan and Australia. 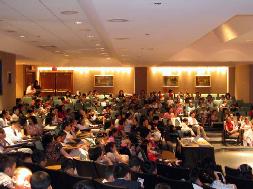 The young practitioners' Fa conference attracts many children and their parents

Before the conference officially began, the young practitioners sent forth righteous thoughts together. They recited Lunyu together. Even the very young children were able to accurately recite Lunyu.

Then a photo show carefully composed by the Washington DC Minghui School to introduce how young practitioners throughout the world spread the Fa and clarify the truth was featured. The photo show with background music drew great interest from the attending children. Many of them were delighted to see themselves in the show.

At around 10 a.m., the experience sharing officially began. During the break, all of the children and their parents practiced the third set of Falun Gong exercises.

Nearly 10 young practitioners read out their experience sharing articles in either English or Chinese. Regardless of their age, they each talked about how they got rid of many of their attachments and improved their xinxing after they began practicing Falun Dafa. For instance, when some children were bullied by their classmates at school or had conflicts with their brothers or sisters, they would remember Master's words and tried their best to act in accordance with a cultivator's standard and be kind and tolerant. Therefore, they would not feel mad. Many children also talked about how they overcame the interference, and introduced Dafa and explained the facts about the persecution to other people. Young practitioners try their best to cultivate themselves according to the principles of Truthfulness, Compassion and Forbearance, tempering and purifying their beings. 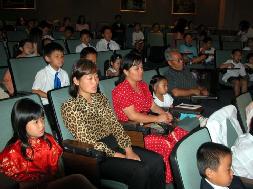 Children and their parents attentively listening to young practitioners' speeches

Five-year-old Jiuxin from Texas, the U.S. said in his speech that he has read Zhuan Falun 10 times and he is currently reading the book for the 11th time. He often gives his teachers and classmates bookmarks or other kinds of cards that have content introducing Dafa to clarify the facts to them. He also shared one of his stories. One time, his hands were injured by boiling water. He continuously recited in his heart, "Truthfulness, Compassion and Forbearance are good". As a result, he no longer felt pain in his hands. 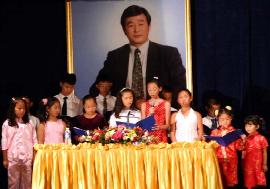 After sharing experiences, young practitioners from the Washington DC Minghui School performed songs including, "I want to say a word". They were also invited to perform the songs at the adults' experience sharing conference. Their pure voices resounded in the conference hall and moved the attendees. The song "I want to say a word" expressed the children's encouragement to their parents who were unlawfully detained by police officers because they refused to give up their practice of Falun Gong. When the young lead singer sang, "Please do not worry about me, please make the best use of your time to clarify the truth and save sentient beings", she choked up with sobs. The children's pure compassion moved many people to tears.

During the Fa conference in the afternoon, a video program calling for the rescue of persecuted Falun Gong children were played twice. To assist with the rescue effort, young practitioners held an activity with the theme, "Kids saving kids" with the guidance of a western practitioner named Lee. Lee first showed 30 transparency slides, including vivid pictures and text to help children have a better understanding about the persecution. Then each young practitioner designed a postcard to express their wishes and will send them to Mainland China, so as to help more people to learn about the beauty of Dafa and the brutality of the persecution.

During the intermission and after the Fa conference, the animated cartoon, "Golden Monkey Subduing Demons" was played. The children enjoyed the cartoon very much.

On the same day, the 2005 Washington DC Falun Dafa Experience Sharing Conference was simultaneously held in the Renaissance Hotel and Grand Hyatt Hotel.