Wisconsin: The Parade Goes On (Photo)

(Clearwisdom.net) Thousands of Wauwatosa parade goers watched the 100+ groups including marching bands, equestrian teams, floats and many cultural groups. The many different cultures and lifestyles represented the parade and showed the diversity and greatness in the community of Wauwatosa, Wisconsin, a suburb of Milwaukee, a major center in the mid-western United States.

Even when heavy rains fell half way through the parade, the avid parade goers stayed and watched as the final float made its way past.

For the third year, Falun Gong, a traditional Chinese meditation system, participated in the parade demonstrating their slow moving exercises for the crowd. Many in the crowd started to mimic the Falun Gong exercises as the sparkling gold and white float lined with pretty pink lotus flowers glided past. 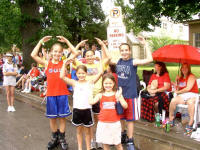 Deb Baverstock, a Falun Gong practitioner said, "We look forward to participating in this parade every year. Everyone here is so kind and is so enthusiastic about the parade. Many practitioners are from Mainland China and can truly appreciate the freedom the United States has since communism restricts the freedom and liberty of their people."