Taiwan: Falun Dafa Association Calls Upon Singapore Government to Not Become Accomplices of the CCP (Photos)

On June 13 2005, the Falun Dafa Association of Taiwan held a press conference at the Legislative Yuan to "Call Upon the Singapore Government to Not become Accomplices of the CCP." The practitioners were protesting the Singapore government's unreasonable barring of Taiwanese Falun Gong practitioner Nie Shu-wen from entering its territory. After the press conference, the association went to the Ministry of Foreign Affairs to deliver an appeal letter which urged the Ministry to safeguard Taiwanese citizen's rights and send a grave protest to the Singapore government. 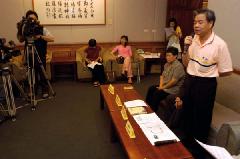 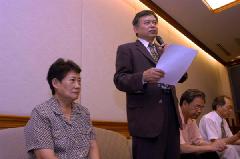 A friend who traveled with Ms. Nie asked the officer whether it was because Ms. Nie practices Falun Gong that the Singapore authorities banned her entry. The officer did not deny anything at that point.

Legislative councilman Lin Chung-Mo, the chair of Foreign Affairs Committee, said that the unreasonable barring of an innocent Taiwanese was probably because Nie was a Falun Gong practitioner. Lin said that the Singapore government failed to respect basic human rights in this case and his FAC would urge the Taiwan Ministry of Foreign Affairs to dialogue with a Singapore representative [consul] to Taiwan to get a solution.

Chang Ching-Hua said that Nie had entered Singapore before and had never violated Singapore's laws. The treatment she received was unreasonable and violated her rights of free travel and belief. In addition, the Singapore authorities even confiscated a box of books that expose the CCP's nature. Apparently, the Singapore government was pressured by the CCP to violate her human rights. The whole world should ask if Singapore has become a colony of the Chinese communist regime.

Since the Jiang regime and the CCP started to persecute Falun Gong in China in July 1999, the registered Falun Gong group in Singapore has never received proper legal protection. For example, the authorities have routinely refused to grant the group the use of public facilities, they have rejected practitioners' citizenship or permanent residency applications and arbitrarily confiscated Falun Gong materials--all signs that indicate the Singapore government has been pressured by the CCP to violate Falun Gong practitioners' rights.

Professor Chang urged the Singapore government to not become an accomplice of the CCP by using repressive measures against innocent people. She hoped that the Singapore government wouldn't try to please the CCP by suppressing Falun Gong, because such behavior would damage its own reputation as a democratic state. She also hoped that the Taiwanese government would express its grave concern on this issue and protect Taiwanese citizen's rights. 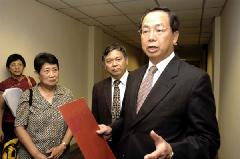 To express the association's protest against the Singapore Government for violating a law-abiding Taiwanese citizen's rights, the Falun Dafa Association went to the Singapore Trade Office to Taiwan to deliver a protest letter on the morning of June 14. The association also requested the Singapore authorities to offer an open apology to practitioners and promise not to violate practitioners' rights in the future. Officials at the trade office said that the representative wasn't available to receive the protest letter and asked the association to wait for further notice. However, Mr. Chen, the assistant representative of the Office, met with practitioners. Ms. Nie asked Mr. Chen why the Singapore government would repatriate a person who had visited the island state before. In 1998, Ms. Nie attended a Falun Dafa Sharing Conference in Singapore and Mr. Li Hongzhi lectured at that conference. Nie gave two possible reasons: 1) she has recently withdrawn from the CCP; 2) she is a volunteer Falun Gong contact person. In reply, Mr. Chen claimed that the case was not related to Falun Gong, although he could not give any other plausible reason.

According to a Taiwan practitioner who has returned from Singapore after attending a local sharing conference there, local practitioners phoned them while they were still at the airport. At that time, the Singapore practitioners told them that many police officers have been stationed around the hotel at which they were to stay. Furthermore, claiming a desire to learn about how practitioners "study the Fa," many plainclothes security agents monitored the practitioners' group study and sharing.

This practitioner particular stressed that no hotel had ever required him to provide his address in Taiwan; however, the hotel that he stayed at in Singapore required every practitioner to fill out their addresses in either English or Chinese. In a large group study on the evening of June 11, 4 Singapore security officials (3 male and 1 female) came to the site and asked to join around 8pm. Practitioners told them that Falun Gong activities were open to the public and they were welcome to join. However, the agents repeatedly used video cameras to record practitioners during the meeting.

The practitioner also expressed his gratitude to Taiwan officials in Singapore. One official visited practitioners at their hotel to apologize for the incident, and also left his business card and cell phone number saying that practitioners could him for help.

Professor Chang Ching-Chi asked the assistant representative of the Singapore Trade Office in Taipei if all activities of the sharing conference were monitored because participants were practitioners of Falun Gong. Chang also told him that Falun Gong had no interest in politics and had never used violent measures to resist the persecution.

The Falun Dafa Association said that it would determine future actions depending on the response from the Singapore government.