Canadian members of the spiritual group Falun Gong are appealing to the Canadian government to investigate alleged spying and harassment by Chinese intelligence agents.

Last week two Chinese diplomats in Australia defected with files indicating that the Chinese government has a network of spies infiltrating Falun Gong in Canada. 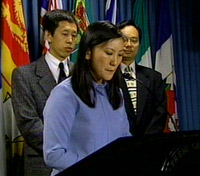 But Canadian Falun Gong members say some of the files contain personal information that could only have been compiled on Canadian soil.

At a news conference on Parliament Hill Friday morning Falun Gong representatives said the intelligence files smuggled out of China only confirm what they've known for a long time.

Intelligence documents released earlier by the U.S. pro-democracy organization Freedom House revealed that a special unit of Chinese intelligence called the 610 Office has been spying on overseas Falun Gong members since 1999.

Montreal resident Ying Zhu says when she went back to China to visit her mother recently, she was arrested by agents of China's Public Security Bureau and held for 33 days.

She says in addition to trying to recruit her to spy on Falun Gong members in Canada they demanded she give them detailed information on friends listed in her phone book.

"When I refused they told me they knew everything about every Falun Gong practitioner in Montreal," she said.

Montreal accountant Wey Dun Gwang says he's received threats from people he believes to be agents working out of the Chinese Consulate. "They said, 'You'd better not practise Falun Gong or your life will be in danger.'"

In the House of Commons Conservative deputy leader Peter MacKay challenged the government to crack down on Chinese espionage [...]

She said the Canadian Security Intelligence Service "is well aware of the allegations and I can reassure you CSIS is doing everything necessary."

But the Falun Gong practitioners say a year ago they gave the government a report detailing illegal surveillance and intimidation by Chinese agents operating on Canadian soil, but nothing happened.