(Clearwisdom.net) From March 18-25 2005, the "Truthfulness-Compassion-Forbearance" Art Exhibition sponsored by more than 10 universities and colleges in Taiwan was first held at Taiwan's Chinese Culture University. 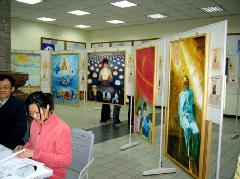 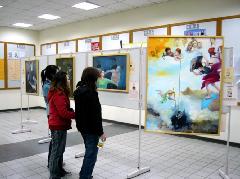 A corner of the "Truthfulness-Compassion-Forbearance" art exhibition

Since the first day of the exhibition, numerous students came to view the paintings. Many students were deeply moved by the spirit manifested in the paintings. Some could not help but say, "Wonderful paintings!" Some students felt that these paintings were very different from others. They felt that the paintings expressed a kind of courage that can't be described by words. Many students could not believe that the persecution of Falun Gong practitioners is taking place today. The first response of many visitors was, "It's shocking!" Students supported the effort to keep holding these kinds of art exhibitions so as to allow more people to learn about the Chinese Communist regime's atrocities.

Because the exhibition was held in a hallway next to the faculty offices, many faculty members, including the President, came to view the paintings. In addition, the university's media, "CCU Information on Campus" interviewed practitioners at the art exhibition and broadcast the report through the TV system on campus. The most enthusiastically received painting was entitled, "A Tragedy in China". Many people were touched by the sorrowful facial expression of the lady depicted in the painting. Some people especially stopped to carefully view the painting, "Coming for you" which portrayed the splendid scene of Gods and Buddhas in heaven. People felt that this painting was really magnificent.

“Prison Guard: "I Can Kill You Any Way I Want, and Report that You Committed Suicide"”