(Clearwisdom.net) Ms. Yang Hailing was born in 1968 and began to practice Falun Dafa in 1997. She lived in the Donghaikuang area of Jixi City, Heilongjiang Province. Prior to her death, Yang Hailing was persistent in Dafa practice. In addition, together with other local disciples, she went out to distribute truth-clarifying materials. They did this to prevent local people from accepting additional lies from Jiang's regime. The gross abuse at the No. 1 Detention Center in Mishan, Heilongjiang Province lead to Ms. Yang Hailing's death. Below is the newest information regarding this case: 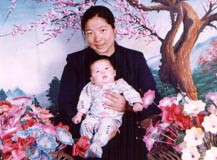 A photo of Yang Hailing and her child before she died

Police in Mishan City arrested Ms. Yang Hailing on the night of April 25, 2002. That same night she suffered torture and was forced to "confess." She was beaten so hard that she could not stand up, and needed to be carried to a car. The next day, perpetrators Ju Hongjun and Liu Xiaohu from the criminal police team came to the detention station to interrogate her. They jabbed needles into her head, arms and hands, and hit her.

In June, when perpetrators Meng Qinqi, Du Yongshan, Li Gong and others from the Political and Security Section brought her in for another round of interrogation, they handcuffed her hands behind her back with one hand from above the shoulder and one from the lower back, dripping hot-spicy mustard oil into her nose with a syringe and spreading it into her eyes. They beat and tortured her for an entire day.

In August, five Falun Dafa practitioners were unlawfully sent to a forced labor camp, but the labor camp declined to accept them. Even after two months, the detention station still would not release them. On October 14, 2002, Yang Hailing and about a dozen practitioners staged a hunger strike and insisted on being released. They were force-fed in retaliation. On November 1, they were sent to the Mishan Hospital for emergency treatment. On November 9, they were returned to the No. 1 Detention Station.

Yang Hailing's body was covered with black and blue marks.

During her detention, the Mishan Court authorities sentenced Yang Hailing to a 12 year prison term. In less than one year, she was tortured to death in the detention center. Afterwards, the detention center didn't allow any visits from any detainees' family members in order to block the news. Even if one was allowed to see someone through some personal ties, no one was allowed to say anything. The news was tightly concealed.

“Mr. Gu Dongying from Tianjin City Dies in 2002 as a Result of Persecution”