Columbus is a medium-sized city located in the state of Georgia in the southeastern US. On Saturday December 3, 2005, Falun Gong practitioners from Tennessee and Alabama held a free Falun Dafa seminar at a public library in Columbus, to introduce Falun Gong to the local people. Columbus's Channel 3 TV Station came out to report on the study session. 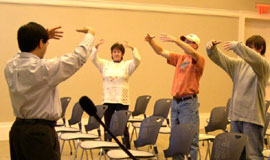 Reporters from the TV station interviewed a Falun Gong practitioner who handed out flyers at the entrance to the library. The reporters asked many questions.

The reporter asked, "What are the benefits of practicing Falun Gong?"

The practitioner answered, "Falun Gong is good for one's physical, mental, and spiritual health." The practitioner then illustrated the benefits of Falun Gong by giving several examples. She also said that because she had benefited greatly from practicing Falun Gong, she wanted to let more people know about it, so that more people could benefit from it also. She told the reporter that learning Falun Gong is always free of charge.

The reporter then asked, "Why is Falun Gong being persecuted by the Chinese Communist Party?"

The practitioner told the reporter that because of Falun Gong's tremendous effect on healing illnesses and keeping fit, and raising people's moral standards, many people learned the practice. The Chinese Communist Party's (CCP) former leader, Jiang Zemin, launched the persecution campaign against Falun Gong out of his jealousy. Every day, practitioners are subjected to brutal torture and abuse in China, just because they want to be good people and conduct themselves according to the principles of "Truthfulness-Compassion-Forbearance."

The reporter asked, "Why doesn't the CCP want to let people improve themselves?"

The practitioner answered, "Being a good person, one cannot tell lies, and one should think of others first and conduct themselves according to 'Truthfulness-Compassion-Forbearance.' This is just the opposite of what the CCP does." She also told the reporter that the US Congress, Amnesty International and other organizations all support Falun Gong.

The practitioner also related some persecution cases. The reporter listened attentively and kept shaking her head, saying that it was inconceivable that such a persecution was still going on. 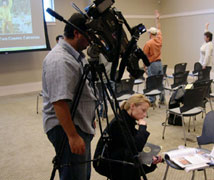 After the interview, the reporters went to the meeting hall where the Falun Gong seminar was going on. The practitioners were teaching the second set of exercises. The photographer videotaped the practitioners teaching and the local people learning the exercise. The reporter read the truth clarification materials exposing the CCP's persecution of Falun Gong. She read carefully for quite some time, and then asked the photographer to videotape the photos exposing the Chinese police's brutal torture of Falun Gong practitioners.

After that, the reporter asked the practitioners if any of their family members in China had suffered persecution. One practitioner answered that the local police had arrested her mother and forced her into a mental hospital to undergo persecution for more than three month ago simply because she practices Falun Gong. They injected her with drugs and forced her mother to take medicines orally. The interview was videotaped, and the reporter asked many more questions, such as what drugs they injected into her mother, what medicines they forced her to take, and what physical problems her mother experienced as a result. The reporter said they would produce the program and broadcast it that evening.

Though there were not many people attending that day's seminar, the attendees learned earnestly. One woman said that she enjoyed the exercises. Two gentlemen learned the exercises from beginning to end. The seeds of Falun Dafa have been sown in Columbus.