Shocked by CCP policeman He Xiujian's rape women practitioners in China, Falun Gong practitioners in Ireland gathered in front of the Chinese Embassy to condemn He's atrocities and protest against CCP's persecution of Falun Gong. 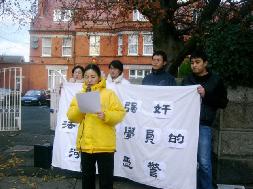 Falun Gong practitioners read an announcement in English and Chinese by the World Organization to Investigate the Persecution of Falun.

The announcement stated, "The crimes the Chinese Communist Party (CCP) has committed against the Chinese people are countless. Since former Chinese diplomat to Australian Chen Yonglin, Former Justice Bureau Chief Han Guangsheng and former Tianjin City Public Security official from the 610 Office left the CCP and exposed the inside story of the CCP's persecution of Falun Gong, the international community has been shocked and has condemned the CCP's atrocities. High-ranking officials of the CCP rush to find a route of retreat by denying their involvement in the persecution. However, the above-mentioned people and entities chose to go against the trend of history by escalating their crimes. Since 2003, twenty CCP officials involved in the persecution, including Jiang Zemin, have been charged for committing genocide, crimes against humanity and torture in many countries. It is a warning to those who are still committing crimes."

“My First Breakthrough in Clarifying the Truth”