At 9:00 a.m. on December 3, 2005, the 34th Annual Richardson Christmas Parade was held along Plano Boulevard. Falun Gong practitioners from Dallas participated in the parade for the second time and were warmly received by the spectators. They also won a first place award for their float. 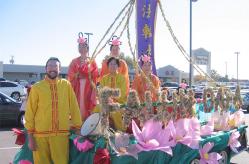 The first Saturday in December is the day when the City of Richardson, Texas celebrates the coming of Christmas. In the morning, a grand parade kicked off the celebration. Different groups and individuals in the community participated in the parade. Together with residents who came out to watch the parade, everyone was immersed in a delightful festival atmosphere. That evening, an awards ceremony was held at Christmas Village at City Hall Square, and after that, a huge Christmas tree was lit, symbolizing the arrival of the Christmas season.

In early winter in this part of the United States, the sun is warm and the sky is a clear blue. The trees have been tinged with red and yellow, creating a luxurious pallette. Everyone was in a good mood. People lining the street anticipated the arrival of the parade procession. The Falun Gong practitioners' contingent was very eye-catching even from a distance, with their bright golden colors. 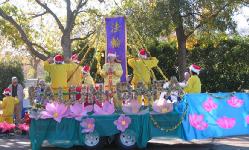 Three practitioners walked at the front of the procession holding a banner reading "Falun Dafa" with red words on a yellow background. A beautifully decorated float in the shape of a boat, its sides arranged in blue and green, echoed the blue sky and made the assorted lotus flowers on the float purer and more charming. A tall banner with the words, "Falun Dafa" and "Truthfulness-Compassion-Forbearance," could be seen from a great distance. Practitioners in golden yellow exercise suits demonstrated the peaceful and harmonious exercises on the float. Six women practitioners wearing magnificent Tang Dynasty costumes elegantly danced to the music of "Falun Dafa is Good" while holding lotus flowers. The vigorous drumming from the waist drum troupe created an element of excitement among the spectators.

All along the parade route, the spectators frequently applauded the Falun Gong contingent. They were very pleased to receive truth-clarifying materials from practitioners, and kept saying, "Thank you." Some people read the materials immediately. 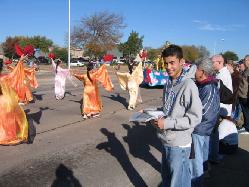 This boy is pleased to get the truth-clarification materials

Attention from the Media

As the practitioners were making preparations prior to the parade, many people paid notice to the Falun Gong float. Some came over to have a photo taken with the group. A journalist from a local newspaper came over and asked to take photos of the practitioners. The local Comcast cable company conducted a live broadcast of the parade.

A journalist from a local newspaper took photos of the Falun Gong contingent along the parade route. When the parade concluded, she followed the practitioners to return to the starting point to confirm some information, because she wanted to publish an article with the practitioners' photo in the newspaper. When she learned that the group was Falun Gong, she said that she knew about the Falun Gong practice site at the Richardson Library. She said that the exercise was very good. The practitioners gave her some more materials so she could access more information.

The Float Arrives in Chinatown

The city of Richardson has a large population of Chinese people. The Dallas area Chinatown is located in Richardson. On weekends, many Chinese people go there to do their shopping and have dinner.

After the parade, Falun Gong practitioners drove the beautiful float to the square in Chinatown. The float and the music "Falun Dafa is Good" attracted peoples' attention, and many people stopped and watched.

“France: Falun Gong Practitioners Parade in Paris Calling For an End to the Persecution (Photos)”