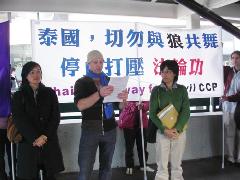 In the afternoon, the practitioners held banners and marched from Chater Garden to the Thai Consulate. They read an open letter on the bridge outside the consulate. In the letter, the practitioners pointed out that the CCP uses diplomatic and economic channels to extend the persecution of Falun Gong to other countries, thus damaging the law and moral foundation of these countries. The practitioners protested the Thai government's giving in to pressure from the CCP, and demanded the immediate release of the practitioners being detained, an end to the violation of practitioners' human rights, and an open apology.

The practitioners pointed out that the CCP will soon collapse, and they hoped the Thai government would not give in to the CCP's political pressure and economic temptation and become accomplices in their crimes.

The Thai Consulate refused to accept the open letter. The practitioners handed over the letter, along with a copy of Nine Commentaries on the Communist Party and truth-clarification literature to the management personnel of the building and asked them to transfer those items to the Consulate.