Montreal, Canada: Clarifying the Truth to the Argentinean Consulate (Photos)

On December 16, a rare snowstorm hit Montreal and many roadside cars were buried in snow. It is estimated that half of the citizens were not able to go out. However, in front of the Argentinean Consulate to Montreal, practitioners held a peaceful protest, calling on its government to investigate the December 14 assault of practitioners in Argentina. Practitioners urged the Argentinean government to hold the assailants accountable and track down the behind-the-scene instigators. 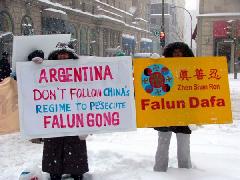 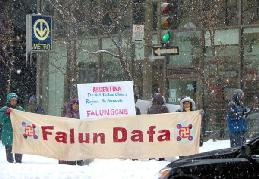 Practitioners requested a meeting with Argentinean Consul General Jorge Raiboi. During the meeting, they described the details of the assault of practitioners who were conducting a peaceful protest on December 14 in front of the Argentinean Congress building. Those practitioners were protesting against the visiting top-ranking CCP (Chinese Communist Party) official, Luo Gan, who is one of the chief culprits of the ongoing brutal persecution of Falun Gong. 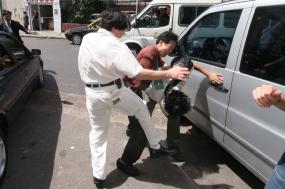 Practitioner Xueye Zhu said, "The Chinese Communist Party's persecution of Falun Gong in a democratic country is an open defiance of human rights and belief. This is no longer a simple issue of violating Falun Gong practitioners' human rights as it has also harmed Argentina and Argentineans." 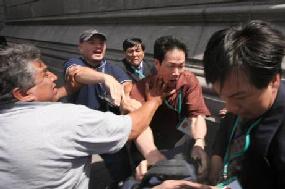 Practitioners put forth the following three requests to Argentinean government:

Consul General Jorge Raiboi promptly said that he would convey practitioners' requests and materials to his government.

Practitioners also described how they had been peacefully resisting the most brutal and inhuman persecution and how the CCP had been exporting the persecution to many countries around the world. In addition, they highlighted the crimes of Luo Gan, one of the key leaders of the persecution. As head of the 610 Office, Luo directly plotted and instigated the propaganda against Falun Gong and brutal torture of practitioners. Wherever Luo goes, he brings persecution with him. Under his direction, the persecution has been ever-escalating.

While chatting with practitioners, Jorge Raiboi said that Argentina is a democratic country, where religious freedom should be protected.

Practitioner Ms. Sun participated in the appeal outside the Consulate. While standing in the deep snow, she said, "I believe that it can't be the police's normal reaction when they see such a brutal assault, and such passive behavior on their part actually violated their responsibility. This must have a reason. I think that the Argentinean police don't know the truth and may have been deceived by the CCP's propaganda. With the widespread of the Nine Commentaries on the Communist Party and the unstoppable tide of withdrawal from the CCP, more and more people, organizations and governments are recognizing the evil nature of the CCP. The CCP's crimes are being exposed widely. For the sake of the Argentinean government and the people, we hope that the government will uphold justice and human rights. We call on the government not to be deceived by the CCP's lies, to hold the assailants accountable and track down the instigators behind the incident, and to help us end the persecution of Falun Gong and all human beings."