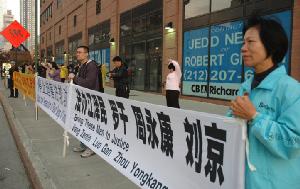 A banner expresses what is in Falun Dafa practitioners' hearts

Nothing can disturb Falun Dafa practitioners' peaceful appeal in front of the Chinese Consulate in New York City. 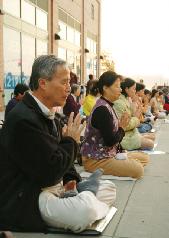 A man who appeared to be from Mainland China took a photo of the backs of the protesting Falun Gong practitioners and then quickly slipped away. Talking to someone on a cell phone, he said, "I dare not stay here long. There is a surveillance camera on the (Consulate Building) wall. If I get caught in the video, I will be killed when I go back (to China). I just took a few photos to show you that I am not lying to you (about Falun Gong)." From this incident, you can see that the Chinese Communist Party's state terrorism hangs over every Chinese person, everywhere in the world.

Falun Gong practitioners have been peacefully protesting the Chinese Communist Party's persecution for over six years.