(Clearwisdom.net, November 25, 2005) From November 16 to 19, 2005, during Hu Jintao's visit to South Korea, the Chinese Communist Party (CCP) exerted pressure on the South Korean Government, forcing it to breach the principles of a democratic country and suppress Falun Gong practitioners' peaceful appeals. The victims include 11 Dafa practitioners from Hong Kong and local practitioners who were unlawfully arrested and charged. 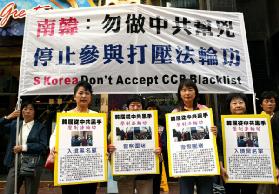 More than 20 practitioners marched for the second time since last Thursday from Chater Gardens to the South Korean Consulate on the afternoon of November 22 to appeal and hand over an open letter.

Practitioners delivered the book, Nine Commentaries on the Communist Party in both Chinese and Korean and Falun Gong truth-clarification literature. 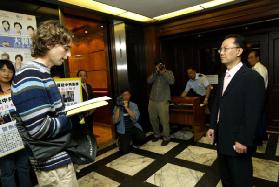 Practitioners returning from South Korea said that they received unfair treatment during Hu Jintao's visit. Ten practitioners were tightly followed by Korean police and plainclothes police after they entered the country. Wherever they ate, stayed, walked or traveled, even using the restroom, Korean police followed them. Practitioner Hu said, "Every morning, the police were waiting for us before we got up and monitored us wherever we went."

Ms. Liu narrated what happened on the morning of November 17. When Hu Jintao left the hotel for Parliament at 10 a.m., a large number of police blocked practitioners appealing outside the hotel and would not let them leave for one hour. She said, "Those were armed police surrounding us. It is inconceivable that we were not allowed to move for one hour."

Since coming to Korea, the practitioners explained the facts to the Korean police. The police said that they knew Falun Gong is good but were following orders from higher levels. A Korean officer told Ms. Lau Wai-hing who was unlawfully deported, "It is not your problem or my problem. It is the problem of the government." Some police disclosed that the CCP foreign ministry contacted the South Korean government and requested stern restriction of Falun Gong practitioners' appeal.

On November 17, on the second day after Ms. Lau Wai-hing's deportation, practitioners in Hong Kong held an appeal in front of the South Korean Consulate in Hong Kong and asked that the South Korean government not follow the CCP to persecute Falun Gong, including not accepting the CCP's blacklist.

“The Epoch Times: Witness to Persecution”