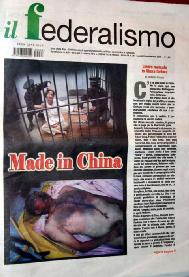 The article was accompanied by a large number of torture pictures downloaded from Yuanming.net (the Chinese-language version of Clearharmony.net) and photos from the special Italian edition of The Epoch Times report Nine Commentaries on the Communist Party. It cited material from the fifth Commentary "On the Collusion of Jiang Zemin with the Chinese Communist Party to Persecute Falun Gong."

The article described in great detail the Chinese Communist regime's brutal persecution of Falun Gong. Mentioning the Tiananmen Square "Self-immolation incident" created by Jiang Zemin and the Chinese Communist regime to defame Falun Gong, Stefania wrote, "I almost couldn't find any language to describe the "self-immolation" tragedy created by the Jiang regime with the sole purpose of forcing people to believe that this spiritual group was a terrorist organization."

In the article with the title "Its Name is Red Nazism," the reporter used two whole pages citing in great detail the fifth Commentary "On the Collusion of Jiang Zemin with the Chinese Communist Party to Persecute Falun Gong." It exposed the number of deaths of Falun Gong practitioners in China as the result of torture and inhuman treatment, various torture methods used against practitioners and many illegal actions of the 610 Office.

Other content of this edition included an article by Alessandra Quiriconi who interviewed Francesco Visioli, the coordinator of the Italian branch of Amnesty International, talking about human rights violations in China. Francesco Visioli stressed, "The situation of Falun Gong is extremely serious. Falun Gong is a cultivation method that is absolutely non-violent, has no political aim and no intention of overthrowing the Chinese regime. It's a peaceful way of life. Despite these, Falun Gong practitioners still suffered persecution by the Chinese regime and were forced to go underground. At least 1000 Falun Gong practitioners have been persecuted to death."

When asked if the long arm of the Chinese Communist regime could extend overseas, he replied, "In certain situations, the long arm of the Chinese Communist regime will extend overseas. For example towards Falun Gong practitioners, although they can safely practice in Italy, the regime uses their relatives in China to threaten them. When they go to the Chinese Embassy for business, they are asked to write a guarantee letter to give up Falun Gong practice. But they can practice in Italy in peace because Italy is a democratic country. It's the safety of people living in China that is worrying."