Falun Dafa practitioner Qu Shuyun was arrested three times between 1999 and 2000 for going to Beijing to appeal on behalf of Falun Gong. Twice she was arrested and sent back to Jilin City and detained at the Heizuizi labor camp. In this labor camp, Qu Shuyun suffered various kinds of torture and abuse. The following is a brief summarization and set of re-enactment photos to demonstrate the torture and persecution she suffered.

Ms. Qu Shuyun is around 40 years old and a resident from Jilin City. She travelled to Beijing on July 21, 1999 to appeal on behalf of Falun Gong.

On September 26, 1999 Qu Shuyun once again travelled to Beijing to appeal on behalf of Falun Gong. She was sentenced to one year of forced labor in October. She was confined in Changchun City Heizuizi Labor Camp, Second Division confinement center. Toward the end of 1999, she was forcefully taken to the Second Division warden's office. The division's police Yinfung and Zhang Lilan used a thin board to slap Qu Shuyun's face and her hand several hundred times. Zhang Lilan also kicked Qu Shuyun's legs while wearing leather boots (See re-enactment #1). Another excuse used for punishing Qu Shuyun was that she did not use the words "re-education through labor personnel" to identify herself on her report; instead she wrote "Falun Gong practitioner." The division's head police officer Zhang Lilan used an electric baton to shock Qu Shuyun and the other practitioners that continued to practice. (Re-enactment #2) For staging a collective hunger strike in order to appeal for their human rights in prison, they suffered the police's barbaric forced-feeding with salt water. (Re-enactment # 3 and # 4)

On September 26, 2000 Qu Shuyun once again went to Beijing. On October 1, she was arrested and beaten by police in Beijing's Tiananmen Square for unfurling a banner. On October 7, she was transferred back to Jilin City. On November 24, she was sentenced to 3 years of forced labor and was once again sent to Changchun City Heizuizi labor camp, Second Division confinement center.

In order to uphold Falun Dafa, Qu Shuyun persistently practiced all the exercises, and she also recited poems from Hong Yin. On January 31, 2001 police chief Liu Lianying and superintendent of police Lang Cuiping used duct tape to seal Qu Shuyun's mouth for two days as punishment and to silence her protest. (Re-enactment # 5) 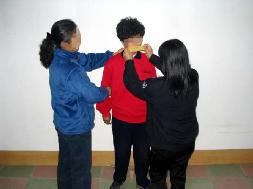 On October 30, 2001, a reporter from Chinese Central Television came to interview detainees. At that time, Qu Shuyun was working in the health clinic. She opened the clinic's windows and shouted loudly "Falun Dafa is good!" to the news crew inside the courtyard. She also appealed to the reporter for help, to demand the unconditional release of all imprisoned Falun Gong practitioners. The CCTV media wanted to do an interview with her, but the police feared Qu Shuyun would expose their crimes and did not allow the interview to take place. Police Chief Liu Lianying even resorted to slapping her six to seven times to silence her appeal.

During the period of her illegal confinement, Qu Shuyun went on hunger strike numerous times to protest. In retaliation, the police barbarically force-fed her with salt water and gave her various injections. They also illegally extended her jail term for an additional 172 days.

“Cultivation Story of a Primary School Principal in Taiwan”