Exhibition of Tortures that Practitioners Suffered in China (4): Cover Head with Plastic Bag, Lock to Steel Frame and Others (Photos)

Covering the Head with a Plastic Bag

Confine a practitioner in an iron chair and lock his/her hands and feet, and then cover the head with a plastic bag to suffocate the practitioner. The feeling of suffocation is especially unbearable. 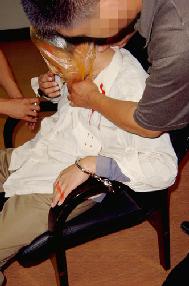 Locked to a Steel Frame 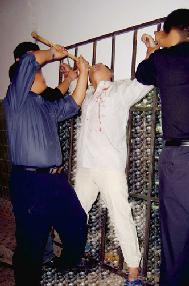 Jixian Detention Center locked a practitioner to a steel frame and beat him up.

Choking with Smoke, Force-Feeding with Wine

Two cigarettes are lit and inserted into the practitioner's nostrils. His mouth is covered, to suffocate him. The suffocation and choking is very painful. The persecutors also inhumanly force-feed practitioners with wine (practitioners don't drink).

Using Batons to Strike Shinbones and Bottom of Feet

Perpetrators hold the practitioner to the floor, and use a baton to strike their shinbones, which causes extreme pain.

Haidian Detention center pushed a Daqing practitioner to the corner of a room, put a chair on top of his legs, with several people standing on the chair and holding his head, one persecutor used a baton to strike the bottoms of his feet.

Forcing to Sit on Wooden Sticks

In Daqing Honggang Detention Center, director Wang coerced several criminals to strip practitioners naked, shave their heads, lock them to steel chairs, and then use high pressure water hoses to spray water into practitioners' mouths. Practitioners had to hold their teeth tightly closed, and often couldn't breathe. As soon as they tried to breathe, water would penetrate through and flow into their lungs and stomach. The high-pressure water continuously deformed practitioners' mouths from one side to the other. A 20-minute punishment of this kind would fill practitioners' stomachs with water, and cause their mouths to bleed.