A Journey to the Far East

After a sixteen-hour train ride, Falun Dafa practitioners arrived in Habarovsk City on the afternoon of August 10. A local practitioner had waited for us at the train station for quite a long time. Because we brought many materials with us, we rented a car. It was already late afternoon when we arrived at the local practitioner's home. To make good use of our time, we decided to first visit a local TV station to tell them the facts about the persecution in China. So we went and met a reporter from a state-run TV station before she left her office. We told her our reasons for coming here and the persecution of Falun Dafa in China. The reporter asked us to call her to arrange an interview the next day.

That night we practiced the exercises at Amur Riverside dock. A constant stream of visitors passed by and many of them were Chinese visitors from the opposite bank entering the Russian border by boat. We handed out information in Russian and Chinese that we had brought. Many visitors stopped to watch us practice the exercises and asked us some questions about Falun Gong. 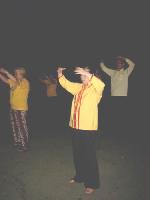 The next morning we took a bus to Vyborg Market and other smaller markets that local Chinese people visit. Before handing out materials, we had spent ten minutes sending righteous thoughts and continued to do so whilst handing out materials. The local Chinese were quite surprised to see Falun Gong materials. They were even more surprised to see Russian Dafa practitioners distributing them. Many of the local Chinese took the initiative to ask for information. Seeing this, many Russian residents asked what we were handing out and we gave them copies of Russian newspapers.

Some of the local Chinese asked if we were Falun Gong practitioners. We told them, "Falun Dafa is good." The other Chinese even asked how much we got paid to distribute the materials here. We replied, "We saved the money from our tight budget to print the materials. We were not paid to do anything. We spent our own money buying train tickets to travel from a faraway city for the purpose of telling people the truth about Falun Gong and the facts of the persecution in China." Still the other Chinese refused to take the leaflets. We told them, "The self-immolation event in Tiananmen Square was staged by the Chinese Government. There has never been any Falun Gong practitioner that has committed suicide or set themselves on fire. From 1992 to 1999, there were over one hundred million Falun Gong practitioners in China. How come no case of suicide and self-immolation was heard of then? Now Falun Gong has spread to over sixty countries throughout the world."

On the morning of August 12, we met a reporter of the state-run TV station as scheduled. On the lawn in front of the TV station building, we were interviewed by the reporter and a photographer. We started the interview by demonstrating the five sets of Falun Gong exercises. Then the interview was conducted in the form of questions and answers. We mentioned the widespread popularity of Falun Gong in China and the unlawful persecution of Falun Gong by the Jiang group. Then we talked about over one hundred torture methods employed by China's labor camps to persecute Falun Gong practitioners. Finally we called on Jiang and his regime to promptly stop the persecution of Falun Gong.

We are about to file a lawsuit with the district court against He Guoan, the Vice-Consul of the Chinese Consulate in Habarovsk City, for his spreading slanderous lies about Falun Gong and inciting public hatred against the practice. When the reporter learned about this, she immediately told us that she would photograph and interview us in the court. After the interview came to an end, the host of another program came to understand our situation and invited us for a live interview and an exercise demonstration on a program the next morning. After we had made an appointment with the host, we left for the district court and arrived there during lunch hour. Therefore, we sat in the reception room sending forth righteous thoughts. In the afternoon we successfully submitted the lawsuit with the court and were interviewed by the state-run TV station. So far, the lawsuit has been accepted by the Russian Prosecutor and is going into the legal due process.

As scheduled, in the afternoon we held a press conference entitled, "Stop China from Exporting State Terrorism" at a meeting hall in the city library. Reporters of several newspapers and one local TV station attended the conference. The practitioners began the conference by introducing the practice of Falun Gong, the five-year persecution of Falun Gong by Jiang's regime, and worldwide awards and support for Falun Gong. The practitioners proceeded to describe how Jiang's group utilized overseas Chinese embassies to spread slanderous lies about Falun Gong, and further specified examples of how the Chinese Embassy in Russia pressured Falun Gong practitioners and spread deceitful lies to the Russian Government and law-enforcement agencies.

The reporters at the press conference were informed that Falun Gong practitioners had filed a lawsuit against He Guoan for his spreading slander. A reporter of one local TV station listened to our statement and photographed oil paintings of the persecuted practitioners in China, which were displayed at the conference, and then interviewed the practitioners. The local TV station broadcast our conference on its evening news with a close-up shot of an oil painting of a crying little girl whose house was confiscated. Afterwards we told the facts to the government agencies and the media and many people told us that they had watched the news report.

At the press conference we played a part of the film "Sandstorm," which depicts the torture and persecution inflicted on Falun Gong practitioners. All of the audience silently watched the film and were shocked by the brutal facts. Then we taught the audience to practice the five sets of exercises. Some of them even had the Russian version of Falun Gong and other materials.

When the press conference came to an end, we decided to go to the Chinese Consulate in Habarovsk City to send righteous thoughts. On our way to the consulate we met Chinese laborers packed on two buses. They all took our leaflets. When we arrived at the Chinese Consulate, its staff had already left the office. One Russian member of the staff happened to drive back to the consulate, and we asked if he could hand the materials to the consul. He promised to do us the favor with delight. We gave him the Chinese materials and asked him to give them to the Consul the next day.

We returned to our hotel. We realized we should make good use of this event to expose the dirty tricks of the Jiang regime. Through this event people will better understand why Jiang's group fears Falun Gong practitioners' revealing the facts of the persecution. This would enable people to have a better understanding of the evil nature of this persecution. At ten o'clock we went back to the TV station to find the reporter that interviewed us yesterday, telling her our intention. She expressed the unwillingness of the station manager to get involved in the international event. As a result, our previous interview was not broadcast on yesterday's evening news. But she still felt like broadcasting our previous interview if the situation became not so tense. We empathized with their dilemma. Because Jiang's group feared that people would know the truth, they exerted pressure on the Russian Government in an attempt to silence Russia with political and economic benefits. After bidding farewell to the reporter, we visited the newspapers, TV stations and media in the same building, telling them the facts of the persecution in China and leaving them truth materials. Meanwhile, another group of practitioners visited the government agencies in Habarovsk City to tell them the truth.

In the afternoon we were supposed to leave Habarovsk City by train but our rented car did not show up as scheduled. So we called to rent a car again, but failed. There was less than one hour left before the train departed. What's worse, we could not rent a car to bring us to the train station. We understood that this was further interference with our truth-clarification journey to the Far East. We then started sending forth righteous thoughts to eliminate the interference while we tried to find a rented car on the street. We thought that this interference should never delay our Far East journey; there were still sentient beings waiting to hear the truth.

At that moment we thought of Master and in our hearts asked Master for help. Finally a taxi agreed to take us to the train station. After we packed ourselves and our baggage into the car, it was almost the departing time of the train. Even the car driver told us that it would take at least thirty minutes to get to the train station because we were still stuck in heavy traffic. We kept sending righteous thoughts. It turned out that we arrived at the train station ten minutes earlier than expected. Because of our heavy luggage, it would take us more time and effort to arrive at the platform; we were really in a hurry. Then it was broadcast that our train was delayed for almost one hour. We were delighted by the news. We again thanked Master for giving us another opportunity to validate the Fa so that we could smoothly board the train headed for the next stop of our Far East journey, Ussurisk City.