(Clearwisdom.net) Liao Yuanhua, 47, was the former Discipline Committee Secretary of the Wuxue City Forestry Bureau. He began practicing Falun Gong in 1998 and was an honest and excellent government employee. After the persecution of Falun Gong began, Mr. Liao persisted in telling the facts about Falun Dafa with a compassionate heart. Liao Yuanhua wasn't afraid of threats or violence. Because he appealed to the government on behalf of Falun Gong, Mr. Liao was dismissed from the Party. After he was illegally detained in a detention center for one year, on June 1, 2001 he was sent to the Fanjiatai Prison in Shayang, Hubei Province.

In Fanjiatai Prison, Liao Yuanhua was subjected to almost 30 different methods of brutal torture, including being burned with hot bricks (1), "flying the airplane," being jabbed with a mop handle, being struck in the head with a coat hanger, having his mouth covered with a towel dipped in excrement, being suspended by all four limbs and "suspended like a swing," being beaten on the face and ears with a shoe, having his eyes smeared with hot peppers, having his head smashed against a wall, having medicinal grade alcohol poured into his nose and mouth, solitary confinement, having his burn-wounded feet beaten with a thorny palm rope, not being allowed to use the restroom, sleep deprivation, injections with unknown drugs, forced feeding, being forced to stand all day long, having his anus plugged with a bottle stopper, having his face burned with mosquito-repellent incense, and other cruel means.

The following pictures, staged by Falun Gong practitioners in Mainland China, illustrate how prisoners and police tortured Liao Yuanhua. Because practitioners in China are still suffering from the persecution, the actors' faces are blurred. Except for the police who wore their uniforms, everyone else was dressed in prison clothes of blue with white stripes. In addition, when Liao Yuanhua went on a hunger strike in the hospital, he didn't wear anything most of time because he was severely burned over most of his body.

How Liao Yuanhua Was Tortured in Fanjiatai Prison

In the Rujian Team at Fanjiatai Prison, Team Leader Shi Heping arranged for six criminal inmates to torture Liao Yuanhua day and night, forcing him to hold still in a standing position, depriving him of sleep, and beating him if he moved even slightly. In order to force Liao Yuanhua to walk in formation together with the other prisoners, they handcuffed his hands behind his back to "fly the airplane" (see below). 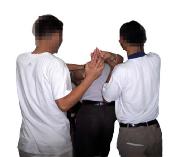 On one occasion Police Officer Li urged the other prisoners to hold Liao Yuanhua in the storeroom and to abuse him for three hours, jabbing him with a mop handle and smacking his head with a coat hanger. As they beat him they asked, "Do you still say Falun Gong is good?" Liao Yuanhua answered, "Falun Gong is absolutely good." He didn't change his answer, and his assailants didn't stop beating him.

On August 3, 2001, Officer Shi Heping arrived with handcuffs and five new inmate prisoners (Wang Haifeng, Chen Yueming, Fu Xiang, Du Shengke, and Huang Heming), and said to Liao Yuanhua, "Today you will enter the next stage of labor reeducation. These five will specially supervise you. Now come with me!" Liao Yuanhua was taken to the No. 8 Team's forced labor site, the brickyard kiln where he was forced to pick up the bricks and put them in order. The bricks are too hot to touch with bare hands. Everyone must wear insulated gloves to protect their hands from being burned. Liao Yuanhua would not be able to do the job at all without the protective gloves. Liao Yuanhua needed to use the restroom. Shi Heping not only didn't allow him to relieve himself, but also brought out the handcuffs, and ordered the prisoners to handcuff him and push him into the brick-kiln.

It was extremely hot inside the kiln. They all could feel the heat coming up through the soles of their shoes. His tormentors made Liao Yuanhua take off his shoes, and ordered him to stand barefooted. He jumped from one foot to the other, as both feet were burning. The inmate prisoners stepped on his feet to intensify the pain. Five of them, two by three, took turns torturing him like this (see below).

Liao Yuanhua couldn't stand the pain any more. After the prisoners put a burning brick under his buttocks, Liao Yuanhua lost consciousness due to the intense pain.

After Liao Yuanhua fainted, he was sent to the prison hospital where the persecution continued. The doctor said that his body was severely burned all over. Nevertheless, Liao Yuanhua's hands were handcuffed to the bed, his legs were shackled, and he was forced to watch a video slandering Falun Gong (see below).

In the hospital, the other prisoners cruelly stepped on Lia Yuanhua's shackles and scratched his wounded feet with a bamboo spike (see below).

In the evening, staff members lifted Liao Yuanhua and carried him to the lobby where they made him sit on a high, narrow bar instead of letting him sleep. His burnt buttocks hung over the bar, his shackled feet were suspended, and his burnt feet were bleeding. By the next day his feet had swollen. 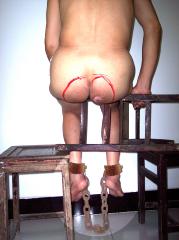 When Liao Yuanhua asked to use the restroom, the prisoners refused to give permission. Liao Yuanhua questioned them, "What sin is it to be a Falun Gong cultivator? Why do you persecute me?" Then five or six inmates held Liao Yuanhua to the ground and brutally beat him. Prisoner Pan Guangfu pounded on Liao Yuanhua's back with a stool until it broke.

His tormentors knew that Falun Gong practitioners don't drink alcohol, so they tried to pour isopropyl alcohol into Lia Yuanhua's mouth. When he closed his mouth tightly, they poured the alcohol into his nose.

On hot days, the staff tied a stool to Liao Yuanhua's neck and burned mosquito-repellent incense to torture his face. On cold days, they didn't let him sleep. As soon as he nodded off they poured cold water all over him.

Torturing his face with incense

They hung Liao Yuanhua up by his handuffed hands and feet, "suspending him like a swing." This made his wrists and ankles bleed. (In this figure, because we did not have enough handcuffs, shackles were used instead.)

On October 28, 2003, Liao Yuanhua was sent to the hospital in Shayang Prison because he went on a hunger strike to protest the cruel persecution. They handcuffed his hands and feet to the bed to force a tube down his throat. They said they would not take out the tube or remove his handcuffs if he didn't agree to eat. After Liao Yuanhua bit the first tube they inserted, the prison doctors pried his mouth open with pliers and inserted a second one.

Since the tube was left in for a long time (every day Liao Yuanhua was fed a bit of liquid food), the pain in his throat prevented him from sleeping. The prison doctors also forcibly injected him with unknown drugs.

At the end of March 2002, using the excuse that Liao Yuanhua hadn't "admitted his guilt," police officer Xiao Tianbo put him in solitary confinement and ordered prisoners Zou Xiong and Pan Guangfu to physically torture him. They made him stand day and night, deprived him of sleep, gave him little or no food, put hot pepper in his eyes, and beat him.

Beating his buttocks with a shoe

(1) In the brickyard kiln at Fanjiatai Labor Camp, it is 80 degrees Celsius (176o F), and the baked bricks are red-hot. The guards pushed Liao Yuanhua onto a pile of hot bricks. With smoke coming from his burnt body, Liao Yuanhua fainted instantly. The police watched and laughed at his suffering.

“Authorities in Xingtai City, Hebei Province Attempt to Sentence Dafa Practitioner Wang Yan, Who is on the Brink of Death”