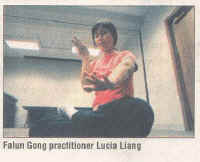 Is Falun Gong a cult or merely a self-directed path to personal enlightenment?

Although the practice of Falun Gong has been branded as a subversive cult in China, practitioners in the United States insist that it is a way to improve the body, mind and spirit through exercise, meditation and teachings rooted in ancient Chinese culture.

"Falun Gong is not a religion," said Margaret Jiang of Ames, an Iowa State University graduate student who began exploring Falun Gong in early 1999. "There is no membership. People may practice it alone or in groups and they are free to come and go. Everything is free, including the instruction which is taught by volunteers."

To counter the ongoing repression in China, Falun Gong practitioners are active in spreading the word about human rights abuse that has been heaped on followers since the practice was outlawed in 1999, according to news reports.

Some of the most colorful demonstrations at the Democratic National Convention in Boston this week were held by Falun Gong practitioners.

Adherents of Falun Gong held a massive procession involving hundreds of yellow-shirted practitioners and demonstrated their meditation techniques in Copley Square to call attention to the five-year repression by the Chinese government against Falun Gong in the country of its origin.

"It is very dangerous to be a Falun Gong practitioner today in China," Jiang said.

The basic moral principles of Falun Gong are truth, compassion, forbearance and tolerance1. By focusing on these virtues, practitioners expand their spiritual growth and enlightenment.

Accepting that they cannot influence their environment at work, at home, in marriage or other relationships, they strive to improve themselves.

"Your behavior can change your environment," said Lucia Liang, 41, of Ames, a post-doctoral student at Iowa State studying molecular biology.

Falun Gong's distinctive exercise and meditation methods can clear the mind and improve health, proponents believe. Five sets of exercises enhance the circulation of energy in the body, Liang said. The final exercise, a sitting meditation, helps create a tranquil mind while "strengthening the divine powers" of the individual.

Barb Egemo, 70, an Ames Lutheran, discovered Falun Gong three years ago when she stumbled upon a workshop at the Ames Public Library.

"I just love the exercises," Egemo said. "I just feel marvelous after doing them. I miss them during the week."

Based on the ancient spiritual traditions of Buddhism and Taoism, Falun Gong was introduced in China in 1992 by Li Hongzhi. The practice became wildly popular under Chinese government supervision.

During the seven-year period, Li Hongzhi was honored by the government for promoting something that was then considered a wholesome practice. At its peak, it is estimated that tens of millions of Chinese, including thousands of government officials, practiced Falun Gong.

However, in July 1999 the government banned the practice and Falun Gong adherents have been persecuted since. Most observers believe the crackdown was due more to Falun Gong's potential to challenge the Chinese Communist Party than for its ideology2.

Because of the repression in their homeland, Jiang and Liang may never be able to return to China. Liang has applied for political asylum on the grounds that as a Falun Gong practitioner, her life would be in jeopardy if she returned home. She has gone through the required FBI background check but does not yet know the outcome of her request.

The practice of Falun Gong worldwide has continued to grow. Li Hongzhi left China in 19983 and now lives in Brooklyn, N.Y. Groups may be found in all metropolitan areas of the United States and 60 other countries.

Jiang believes there may be four dozen Falun Gong practitioners in Iowa, but it is difficult to estimate. She has introduced at least that many people to the exercises and meditation technique in workshops across the state. Because there is no central meeting place for practitioners, the techniques may be practiced alone and anyone can teach others about the practice, there may be many more adherents.

Her sister, Julia Jiang of Minneapolis and an Iowa State graduate, was the first Falun Gong practitioner in Iowa. She introduced the practice to the state when she came to Ames in 1997.

Jiang and Liang treasure the acceptance and freedoms they have found in the United States, something they hope will one day be realized in China.

"In 2002 and 2003, Governor Vilsack issued a proclamation for the celebration of Falun Dafa Week in the state of Iowa," Jiang said. "In 2002, we held activities in front of the Capitol building. We were deeply honored."

“"Being Selfless" and "Considering Others First" are Not Just Words”