Leaving Behind an Upright Legacy: A Practitioner's Recollections of the Early Years of Falun Dafa in China (Part 2)

In the spring of 1992, Teacher began to spread the Fa and teach the exercises around the country. Each time Teacher gave a lecture, he always sincerely and tirelessly taught practitioners the following principles: "Falun Gong cultivation directly targets one's mind," we cultivate "Zhen, Shan, Ren" simultaneously, and cultivators should care less about "reputation, material interest and sentimentality" in order to transform de (virtue) into gong (cultivation energy) and to continue true cultivation and maintain xinxing (mind-heart nature, moral character). Falun Gong has great power and cultivators' gong develops very quickly. Teacher made it possible for each practitioner to cultivate, a priceless treasure which cannot be bought with money, no matter how much money one is willing to pay! Because of this, Falun Gong has attracted countless predestined people to join in cultivation practice. I am one of those predestined people who saw and heard many real miracles. I have witnessed many moving scenes and I have seen firsthand how Teacher's miraculous cures gave many seriously ill practitioners a second life. These recollections cannot ever be removed from my memory.

It was not easy when Teacher began to teach the Fa (Law and principles) and the exercises, because most of the people attending the classes were ill and came for healing their illnesses. During the class they didn't understand much about the Fa-principles that Teacher taught, but they felt that the teachings were good and reasonable. At every lecture, practitioners' bodies were changed a lot, and they felt free from illness and benefited a great deal. Therefore, no matter where he gave lectures, there were always many people who followed Teacher and listened to the lectures one after another. Only when they finally understood the Fa-principles that Teacher taught did they really start on their path of cultivation, beyond the basic concerns of healing and fitness.

A relative of mine lived in Changchun City in the same area as Teacher. In the summer of 1992 my relative suffered from intestinal adhesions and was sent to the hospital. The doctor said that it would be very hard to cure him by surgery because he had already had surgery twice before. Medicine didn't have any effect on him, and there were no other treatment options, only waiting for death. His family members were very worried and looked everywhere for treatment. A Falun Gong practitioner from my relative's workplace told him, "There is a qigong master in Changchun. Master Li is giving lectures to teach the Fa and exercises. In the lectures many practitioners suffering from difficult and complicated illnesses and even critical illnesses have fully recovered after being adjusted and purified by Master Li. Now the fourth class is over and Master Li is going to Beijing in two days." My relative heard about it and asked this practitioner to beg Master Li to treat him. After this practitioner introduced the situation to Teacher, Teacher agreed to the patient coming to his home.

My relative's family carried the patient by taxi to Teacher's home. Teacher was very welcoming. As he was talking to the patient, he opened the window and moved his hand toward the position of the patient's ailment. He then grabbed that being and then threw it out the window. Then Teacher brought over a dish of fruit and gave the patient a banana to eat. The patient said, "I dare not; I haven't eaten anything for seven days." The practitioner immediately said, "Teacher let you eat, you just eat; don't worry." The patient then ate some banana, no pain; then he ate some more, still no pain. At this moment my relative's wife understood and kneeled down to thank Teacher for saving her husband's life. Teacher helped the woman to her feet. My relative tried to give Teacher money to express his thanks. Teacher said, "I don't want a single penny; just go home and practice!" Afterwards, back at home, my relative could eat and drink normally and could also walk and ride his bicycle. With gratitude for Teacher, my relative's whole family attended the fifth set of classes that Teacher gave in Changchun City. After the lectures, my relative experienced great changes in his body and heart, and his understanding of the world also changed greatly. Later on, this practitioner devoted himself to assisting Teacher in promoting Dafa and saving more predestined people, and voluntarily sent Dafa books to his hometown and helped more people to learn Dafa. He firmly practices Falun Dafa and believes in Teacher, following Teacher on the path of cultivation.

In June of 1993, Teacher gave the sixth lecture series in Changchun City. My relative picked up his younger sister from another city and planned to attend the class. His younger sister suffered from heart problems and it was very difficult for her to walk. Once again the practitioner from my relative's workplace introduced the situation of the younger sister to Teacher. The day before the class, Teacher came to my relative's home by taxi and adjusted and purified her body and made her walk freely. The hospital treatment for her problem would have cost over 100,000 yuan (1), however Teacher cured her for nothing. My relative's family was incredulous. Teacher said with smile, "Go to the hospital to check, if you don't believe it!" With awe and gratitude for Teacher, his family brought her to the hospital for a check-up; her problem was mended, and everything was normal. Afterwards my relative brought his younger sister to attend Teacher's classes. After ten days of lectures, all her illnesses disappeared. When she went back home, she could care for herself and she could do some simple housework. She had saved over 100,000 Yuan, and had miraculously gotten well without any pain. Through this experience, his younger sister's friends all highly praised Falun Gong saying, "Falun Gong is such a miracle!" All of them expressed their interest in listening to Teacher's lectures and practicing Falun Dafa. It was exactly as Teacher says, "Those who really have a predestined relationship and can enlighten will come one after another, entering the Dao and obtaining the Fa." (Essentials for Further Advancement - Enlightenment)

At the end of 1992 and 1993, Teacher participated in the Oriental Health Expo in Beijing. During the Expo, Teacher voluntarily adjusted and purified the bodies of predestined people and in doing so, he spread Falun Gong in society. After my relative heard about Teacher being at the Expo, he brought his neighbor, who was suffering from cancer, and other friends to Beijing. 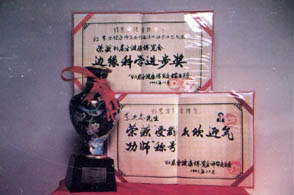 During the Expo Teacher performed many miracles. For example, the hometown friend who suffered from cancer couldn't walk and had to be carried by his family to the Expo site. After being adjusted and purified by Teacher, right then he could walk around. Another example is of a woman, Sun Baorong from Beijing, who was disabled in a bus accident; she lay in a hospital bed for one year. Her family carried her on their backs to the Expo. After being adjusted by Teacher, she stood up miraculously and walked around. From then on, no matter where Teacher gave classes, she would follow and listen to Teacher's lectures. When Teacher gave the seventh class in Changchun City, I saw her in good health and she looked very young. There was also a male practitioner who was in his thirties and was bent over with his back at a 90-degree angle. After being adjusted by Teacher on the spot, along with a cracking sound in his vertebra, he straightened his waist slowly and looked the same as anyone else. Teacher's Fa power and gong potency are incomparably miraculous. During the Expo, Teacher cured many such patients with critical illnesses or suffering with difficult and complicated diseases, and was well received by the masses. Therefore Teacher received the highest honor by being issued the "Fringe Science Progress Award," and was called "Most Welcomed Qigong Master." Teacher donated all the income of his second lecture to the China Jianyi Yongwei Foundation [foundation under the administration of the Ministry of Public Security, for rewarding people who voluntarily combat crime out of conscience and morality]. 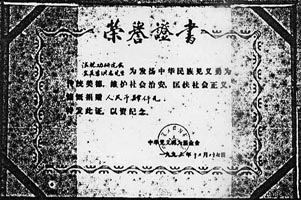 Ten years have passed in a flash. The things I've experienced, one after another, remain fresh in my memory. Teacher has been saving sentient beings with compassion and is protecting all predestined people. Teacher has done so much for us; however Teacher doesn't want any repayment but only that practitioners have a heart of cultivation. Although we have encountered great hazards along our cultivation way, they cannot shake our resolve in following Teacher. Our belief has grown steadfast and firm.

(1) Yuan: the unit of currency in China; 500 yuan is equal to the average monthly income of an urban worker in China.