(Clearwisdom.net) At around 8:00 p.m. on December 28, 2001, Ms. Cui Yaning from Jinzhou City, Liaoning Province was abducted by five policemen and sent to Ling'an Police Station in Jinzhou. After being body-searched, she was promptly beaten by the police.

The police found in her possession a telephone address book. When she tried to destroy the book, several policemen rushed at her, pushed her to the ground and punched and kicked her. After snatching the book away, the police beat her again.

Several policemen then made her lie on the ground facing down and held her tightly. A strong policeman who was over 1.8 meters tall and weighed about 200 lbs then stepped on her back and stomped fiercely. See the picture. 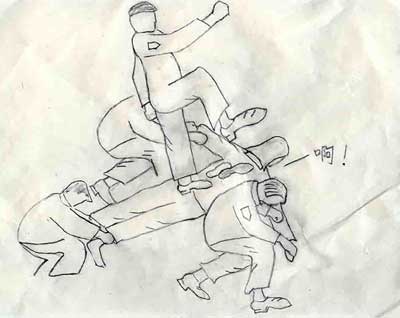 Two months after the above torture, Cui still felt sharp pain in her chest and back.