Canada MP Keith Martin: I Would Hate to See the Situation in South Africa Repeated in Canada

First, let me express my warmest congratulations to you on your new appointment as Minister of Foreign Affairs.

My reason for this letter is to communicate to you an issue that was recently brought to my attention by a constituent. On June 28, 2004 there was a drive-by shooting in South Africa somewhere en-route from the Johannesburg airport to Pretoria that allegedly targeted a Falun Gong Practitioner, David Liang. There is concern that this was a premeditated attack by hit men hired by the Chinese government because Liang was planning to hold a press conference exposing the alleged crimes of two visiting Chinese government officials, Vice President Zeng Quinghong and Minister of Commerce Bo Xilai, implicated in persecuting practitioners of Falun Gong in China. These government officials are facing legal cases submitted in the United States and Poland for crimes against humanity. What is our policy on dealing with Vice President Zeng Quinghong and Minister Bo Xilai? Are they allowed to enter Canada to visit? I would hate to see the situation in South Africa repeated in Canada.

Could you please send your response to my constituency office? 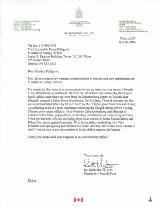 “The Persecution in Shuangyashan, Heilongjiang Province: An Account of the Atrocities Committed Against Practitioners and their Families”