(Clearwisdom.net) Keng Seng Daily News, a newspaper in Taiwan reported on July 17 that persecution cases against Falun Gong practitioners in China emerge one after another incessantly. 36-year-old Ms. Gao Rongrong was electrically shocked in the face and consequently disfigured in the Longshan Forced Labor Camp in Liaoning Province, China. Practitioners were shot at by a hired gunman in South Africa. In order to support Falun Gong practitioners and call on the Chinese authorities to stop the persecution, practitioners from Hualien area recently staged a petition in the Ji-An Huanghun market. They received many warm responses. 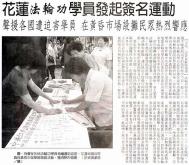 In China, when the practice of Falun Gong was growing quickly, numerous people came to learn Falun Dafa. The increasing momentum aroused the Chinese authorities' high concern. Thus, in order to prevent Falun Gong from expanding, the authorities have used political means to coercively arrest or tortured practitioners. Over the past few years, countless practitioners have died from the persecution.

In June, this year, apart from the disfiguring incident of Ms. Gao Rongrong, who is still imprisoned in the First Attached Hospital of China Medical University located in Shenyang City, two other Falun Gong practitioners Ms. Wang Xiuyuan and Ms. Wang Hong who were imprisoned in the same labor camp were also tortured to the verge of death. They died only in a few days after they were released. These did not only happen in China but also in other countries. According to foreign media reports, on the evening of June 28 in South Africa, after nine Australian Falun Gong practitioners arrived at the Johannesburg International Airport, they rented vehicles to go to the capital, Pretoria. On their way, they were shot at. The injured practitioner was immediately sent to a nearby hospital.