US Congressman Robert E. Andrews: Awareness of This Persecution Is Being Increased in America and Around the World

On May 13, 2004, US Congressman Robert E. Andrews wrote to Falun Gong practitioners in support of Falun Gong. He said in the letter: I am proud to be an outspoken supporter of the Falun Gong and their efforts to achieve freedom from the persecution they face at the hands of the Chinese government.

Congress of the United States
House of Representatives
Washington, DC 20515-3001

As the member of detained Falun Gong continues to escalate, it is becoming increasingly clear that the Chinese government has no intentions of curbing its irrational harassment of those benevolent people, it is only through international pressure that the PRC will be forced to respect the rights of all Chinese citizens. With this in mind, I have consistently called upon members of this administration to address the issue of Falun Gong persecution with the Chinese government, and I will continue to do so until a positive change is affected. Over a year ago, I along with several of my colleagues in the House of Representatives, called upon the Secretary of State Powell to urge the release of Falun Gong practitioners with relatives in the United States. Earlier this year, we were pleased to learn that one of the practitioners named in our appeal to Secretary Powell was released by the PRC. Despite this victory, we still have much work to do. The inhumane persecution of Falun Gong practitioners is an affront to human rights, and as such it can not be tolerated. The Chinese government continues to imprison, torture, and murder these peaceful individuals due to their fear and misunderstanding of the Falun Gong movement.

I look forward to the day when the Chinese government accepts the Falun Gong as a peaceful, enlightened aspect of their nation's culture, but until then I encourage such of you to remain outspoken in your efforts to free Falun Gong practitioners from persecution. Rest assured that I will continue to support all such efforts until each citizen of the People's Republic of China is afforded the rights they so justly deserve. 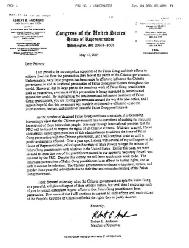 “US Senator Christopher Bond Congratulates the Midwest-US Experience Sharing Conference in Chicago [May 21, 2004]”