Falun Dafa practitioner Mr. Zhang Jianhua was from Yushu City, Jilin Province. He was first inhumanely beaten to the extent that both his chest and abdomen became heavily swollen. He was then placed on a "constraining bed" for torture. On January 22, 2004, which was the Chinese New Year's Day, he passed away on the "constraining bed."

Mr. Zhang Jianhua, who was around 50 years old, and was sent to the Jilin Prison not long before the Chinese New Year's Day. On New Year's Eve, he refused to follow the demands from the lawless officials and was thrown on a quilt and beaten by inmates taking instructions from prison guards. Mr. Zhang was then taken to a "maximum security unit." Soon, both his chest and abdomen swelled up as a result of the inhumane torture. The guards in the prison did not take him to the hospital. Instead, they continued the torture by leaving him on the "constraining bed." Not until the next afternoon (Chinese New Year's Day), did the inmate on duty think about taking a look at him. By then, Mr. Zhang had long since passed away.

In order to deceive other inmates and Mr. Zhang's family, officials of Jilin Prison have made up lies throughout the prison hierarchy, covering up the fact that he died because of police brutality. 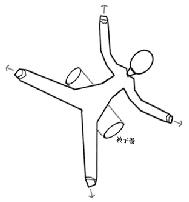 The torture of placing a person on the "constraining bed" is composed of three phases:

According to reports on Clearwisdom Net, several Falun Dafa practitioners were taken to small cells for going on hunger strikes. They were put on the "constraining beds" for over thirty days. As a result, each of them suffered from spinal damage and could not sit down long after being taken off the bed. Their feet became swollen as well. Many of them were "further stretched" while being constrained to the bed. Their arms were injured and skin at their wrists was pulled off.

List of police officers in charge of persecution at the Jilin Prison:

“Practitioner in China Clarifies the Truth to Friends from Other Countries”