Because I do research work for less than 20 hours a week and am not taking any courses, the choice was obvious when Atlanta practitioners sent out a request for more help for the G8 summit. Even though I had taken some time off for the Chicago Fa Conference, I have clarified the truth to a certain extent to the professor I work for, and he is very supportive of my involvement in raising awareness about the situation of Falun Gong. I told him the importance of the summit and what we were trying to achieve through our peaceful appeals. He asked me to complete the work on one important document before I left, which I did.

I am glad that I went to the G8 summit. Once again, I saw disciples from all over the US making earnest sacrifices to clarify the truth, and I felt like I had melted into the Fa yet again. The following are some of my experiences over the three days when I was in Georgia, USA, helping clarify the truth at the summit. 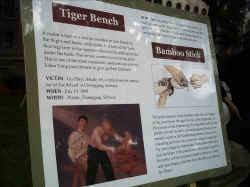 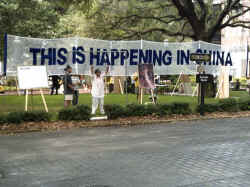 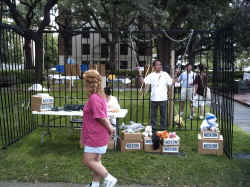 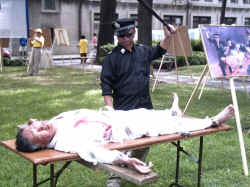 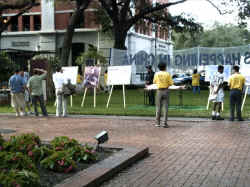 Practitioners from my state picked me up from home at 3 a.m. I had slept since only 1:30 a.m. the night before (I had wasted time doing something not worthwhile), but for some reason, I was alert and refreshed for the next 3 hours. I slept for only one hour in the van, but I did not feel tired.

We reached Brunswick (a site near the summit where media and government leaders would pass by) at around 8 a.m. We started to set up banners along the roadside where we had been given permission to have a site. The exercise music started playing and several practitioners started to do the exercises.

The sun was really hot, and there was no shade at all on the roadside where we were standing. Most of the practitioners were female or younger practitioners. As a young adult male practitioner, I felt that it would be proper and chivalrous for me to help hold the corner of the heaviest banner, and I did so.

Somehow, I always end up holding banners at conferences, parades or other truth-clarifying events, even though my selfish heart really wants to do the exercises! But I do like to hold banners, and besides, I notice that whenever I help with Fa-rectification activities, I never feel tired. Before I obtained the Fa, I would get splitting headaches or get very ill if I stayed in the sun for more than half an hour, but at truth-clarifying events, I am somehow able to hold heavy banners for more than 3 or 4 hours, even in grueling conditions. I know that it is because of Master's protection and reinforcement that I am able to do so.

Later in the afternoon, we moved from the main road to our other site in Brunswick. It was at a Chinese restaurant whose owner was very supportive of us. In the afternoon, the sun was even hotter than in the morning. My lack of sleep got to me and I started to fall asleep even as I held the banner.

Once again, the unselfishness of Dafa practitioners came to the fore. A 30-year old female Chinese practitioner from my state, who is a PhD student and had taken time off from research like me, volunteered to take my place. I knew that she had been holding heavy banners all morning just like me and I tried to refuse. But she insisted that it was all right, and asked me to join the practitioners who were performing the exercises nearby.

Thanking her, I joined the practitioners who were meditating. After less than an hour of doing the sitting meditation, I felt refreshed and energized. I walked back to the banner and helped hold it up until the end of the day. Throughout the day, we were visited by media reporters and passing cars honked to show their support.

On the second day we went to Savannah, close to where the actual G8 summit was. We had two sites, and one of them had the torture exhibition of the brutal forms of torture that are used on Falun Gong practitioners in China.

I sat down to study the Fa. I hadn't studied for even 15 minutes before a veteran Chinese practitioner from my state walked up to me and said, "Look, we are really short of hands and need all the help we can get. You can always study the Fa later or in the hotel room in the evening."

"But," I started to protest, "I am just taking a short break." I then paused, seeing the fallacy of my argument. Nodding at him, I got up to see where I could help.

Looking around, I could see that our site was really understaffed. There were just enough practitioners to hold banners, hand out flyers and talk to people. And I wanted to relax and study the Fa! Of course I had all the time I needed in the evening to study the Fa, and right now, practitioners were needed to help with clarifying the truth. So I went back to help -- mostly I just helped with holding the banner as I am shy of talking to people face-to-face.

It was on this day, after spending two days with other practitioners, that I truly felt like I could let go of selfishness and melt into the Fa.

Early in the morning, I once again did easy things, first talking with other Western practitioners about cultivation issues and other truth-clarification projects. Then I went to do the standing exercises for an hour, as I knew that I would make excuses not to do the exercises once I got back home.

The group practice was as powerful and wonderful as it always is. I hadn't done the exercises in a group in a long time, and doing it together with so many practitioners really helped me -- I truly felt like my body was cleansed, strengthened and refreshed after the exercises.

After the exercises, I finally summoned enough courage to hand out the flyers and talk to people face-to-face. With a bunch of flyers, I stood at one of the corners of the park, handing out flyers to people in the car or pedestrians who wanted to know more about the event. With such vivid and true examples of persecution before their eyes, almost everyone picked up a flyer.

There were many touching stories that I witnessed as I stood at the strategic corner of the park where cars had to turn, and which was in full view of anyone who passed by one of the main streets in Savannah. I would like to recount some of them:

- One person said that he had gotten information about Falun Gong already, but he wanted to see us again and show his friends the truth about Falun Gong because he knew we were friendly and peaceful

- Three elderly ladies were on the verge of tears when they saw the torture exhibits. They asked, "Is this really going on in China?"

- An African-American lady had heard about Falun Gong through her work for an NGO in the UK. She came to take some pictures to show her friends what was going on in China.

- An elderly lady told me that she had heard a bit about the persecution in China, but she only knew how bad the persecution was upon seeing the torture displays. She said that we needed to do more exhibits like this, so that people could see for themselves what was going on in China. She said "Thank you for coming to Savannah to show us the truth."

- Several people stopped the cars they were driving, parked at the closest parking lot and came out to look at the exhibition.

Near the end of the day, solemn music emanated from a bamboo flute deftly played by a Chinese practitioner. One female Chinese practitioner from my state was demonstrating the "solitary compartment" torture (she hadn't been tortured herself, but she was also crying because, as she told me later, she could mentally feel the pain and anguish that Dafa practitioners in China underwent). I saw the reactions and shock on people's faces as the truth of the persecution of Falun Gong in China hit them. And one of the graphic images drawn by a practitioner shocked me from the depth of my being -- it showed a bloodied young female practitioner being violently beaten by two policemen as a vicious dog mauled her legs.

I couldn't help sobbing. As a young man, even though I try to be a cultivator and a dignified and upright human being, most of my thoughts revolve around my own self-interest and establishing a good life for myself. As my true self took in all that I was seeing, my selfishness and human side started to melt. In my heart, I felt the importance of Fa-rectification, how much Dafa practitioners had done to clarify the truth, and the enormous sacrifices made by mainland Chinese Dafa disciples to validate Dafa in the human world. At least for those few hours towards the end of the day, I let go of selfishness, melted into the Fa and was determined to save sentient beings. Master's poem "Assisting the Fa" from Hongyin continuously ran through my mind:

Making a wish to save sentient beings,
Assisting Teacher in his journey in this world;
Aiding me to turn the Fa wheel,
The Fa succeeds and free in heaven and earth.

At the end of the day, as we were packing up our materials and displays and getting ready to leave, one of the coordinators announced that the mayor's office had left a gift for all practitioners: a specially hand-baked cake (which was delicious) to thank us for bringing the truth about Dafa and the persecution in China to Savannah! I was so happy to hear that the mayor had given us such warm support and established a good relationship with Dafa!

As we packed up our bags and materials and left for home, the atmosphere was relaxed and peaceful, an atmosphere that I've felt only when I'm with Dafa practitioners. We spent our 4-hour drive back to Florida talking about cultivation issues, predestined relationships and our enlightenments over the past several months.

Overall, the process of personal cultivation and Fa-rectification at my trip to the G8 summit was, like other Dafa events, an unforgettable one.

“Illustrations of the Systematic Persecution of Falun Gong by Jiang's Regime”