UK Member of European Parliament John Bowis signed a petition on the 30th of May 2004, calling on the French authorities to retain liberty in France after he heard from a Falun Gong practitioner in his London constituency about how she was arrested at a Chinese/French joint-sponsored event after the Chinese authorities applied pressure on France. Mr Bowis MEP said in his letter "I was very sorry to hear of your totally unacceptable treatment in Paris. I will write to the British Minister responsible for Europe and to the Commissioner responsible for Foreign Affairs and will let you know what response I receive." 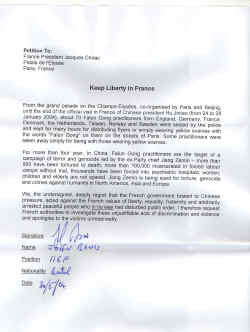 Attachment, the original text of the letter:

From the grand parade on the Champs-Elysées, co-organized by Paris and Beijing until the end of the official visit in France of Chinese president Hu Jintao (From 24 to 28 January 2004), about 70 Falun Gong practitioners from England, Germany, France, Denmark, the Netherlands, Taiwan, Norway and Sweden were seized by the police and kept for many hours for distributing flyers or simply wearing yellow scarves with the words "Falun Gong" on them on the streets of Paris. Some practitioners were taken away simply for being with those wearing yellow scarves.

For more than 4 years, in China, Falun Gong practitioners are the target of a campaign of terror and genocide led by the ex-party chief Jiang Zemin -- more than 900 have been tortured to death, more than 100,000 incarcerated in forced labor camps without trial, thousands have been forced into psychiatric hospitals, women, children and elderly are not spared. Jiang Zemin is being sued for torture, genocide and crimes against humanity in North America, Asia and Europe.

We, the undersigned, deeply regret that the French government bowed to Chinese pressure, acted against the French values of liberty, equality, fraternity and arbitrarily arrested peaceful people who in no way had disturbed public order. I therefore request French authorities to investigate these unjustifiable acts of discrimination and violence and apologies to the victims unreservedly.