(Clearwisdom.net) To celebrate the fifth World Falun Dafa Day, the 12th Anniversary of Falun Dafa's Introduction and Master's Birthday, Falun Gong practitioners handed out information and hand-made lotus flowers, and explained the facts about Falun Dafa to officials from the state and city governments two months ago. Everyone knew the important thing was the process and the purpose is to save sentient beings, have government officials and staff see Dafa practitioners' peaceful and compassionate style and win their understanding and support based on our sincerity and rationality. 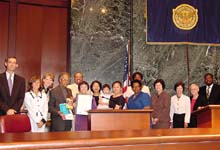 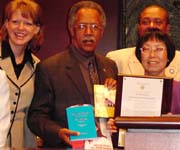 Member of City Council, Mr. Martin (second from left) issues proclamation and a Falun Gong practitioner accepts the award and presents a book Falun Gong and other gifts 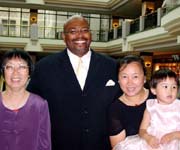 Mr. Derrick Boazman, a Member of City Council has a group photo with Falun Gong practitioner

At 1 pm on May 17, on the monthly meeting of Atlanta City Council, members Jim Maddox and Clarence Martin issued proclamation of World Falun Day and praised Falun Gong practitioners for their peace and sacrifice facing the unjust treatment in China. Representative of Falun Gong practitioners expressed appreciation to city council and call on their continuous support by paying attention to the persecution of Falun Dafa practitioners in China and the lawsuit against Jiang Zemin and helping to end the inhumane persecution.

Practitioners took the opportunity to present the magazine Compassion, other information, and hand-made lotus flower to warm-hearted member Anne Fauver. She immediately placed to each member's desk for them to read.

“Switzerland: Report from Swiss Newspaper La Liberte: A Chinese Painter Testifies to the Persecution of her Belief”