(Clearwisdom.net) UK Dafa practitioner Mrs Fullerton, who lives in the centre of England, is one of the seven practitioners who were maltreated by the French police during the Chinese New Year period in Paris. After the Paris incident, she wrote to Member of European Parliament Ms Liz Lynne to describe the maltreatment she experienced in Paris. Ms Lynne immediately contacted the French authorities to request that the highest authority of the French police investigates this matter and offers assurance that the similar events will not occur in the future. At the same time, Ms Lynne replied to Mrs Fullerton and expressed her admiration of Falun Gong practitioners' peaceful efforts to end the persecution. The reply letter is as follows:

I would like to offer my sincere thanks for bringing to my attention the unacceptable treatment that you and other practitioners of Falun Gong were subjected to by the French authorities during the Chinese New Year celebrations in Paris.

Having been exceedingly disturbed by your report of such blatant violations of human rights, I have contacted the French authorities to convey my concern. I requested of the Directorate General of the National Police that an investigation into this matter be conducted and that steps should be taken to ensure that such a situation will not arise in the future. In addition, I believe that an apology is owed to you and to the other individuals involved in this matter.

I am aware that Falun Gong practitioners have long endured brutal persecution by the Chinese authorities and I applaud your continuing peaceful efforts to protest and reform the regime's actions. It is regrettable that members of your group must also endure maltreatment in France, a country that professes tolerance and human rights.

I commend you for having the courage to speak out about your experience and thank you again for informing me about this matter. 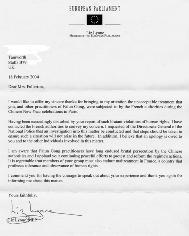