Washington State Senators Stand Up to the Consul General of PRC in San Francisco: "We Will Decline Your Invitation Due to the Ongoing Persecution of Thousands of Innocent Falun Gong Practitioners by Your Government."

(Clearwisdom.net) Washington State Falun Dafa practitioners held two day-long truth-clarifying events in the state capitol of Olympia and met with many State Senators, State Representatives, and their legislative assistants each day. They clarified the truth to the state government officials through a slide show and the FGMTV video: Persecution of Falun Gong, A Worldwide Campaign by China. They distributed hand-made lotus flowers and a one-page flyer during the event. Four practitioners went to speak with State Senator Adam Kline, who has been supportive since the very beginning. Practitioners showed Senator Kline a documentary on how Chinese government officials, and specifically former Consul Wang in San Francisco had slandered Falun Gong in Washington State, and asked him to sign a letter to Governor Locke of Washington State. Two days after the visit, on his own initiative, Senator Kline told practitioners that he had received an invitation from the Consul General in San Francisco to an event in Seattle, Washington that he would decline. Then he sponsored a letter and solicited signatures from his colleagues in the Senate. Eight Washington State Senators co-signed the letter. These elected officials in Washington State are showing the courage to adhere to their conscience and we applaud their righteousness. Below is the letter.

Consul General of the People's Republic of China

We, the undersigned members of the Washington State Senate, would like to acknowledge your invitation to attend a reception on March 10th in Seattle. We regret to inform you that, although we support our country's increasing contract and trade with China, and acknowledge China as a friend, we will decline your invitation due to the ongoing persecution of thousands of innocent Falun Gong practitioners by your government.

The persecution against Falun Gong practitioners has claimed at least 890 lives to date. According to a July 2003 radio interview, former US Ambassador to [Hungary] Mark Palmer estimates that number to be in the range of 10,000. Over 100,000 people have illegally been sent to forced labor camps without trials. More than 500 people have been sentenced to prison terms of up to 18 years. Hundreds of thousands have been illegally arrested, detained, and tortured since the persecution began in 1999. And more than 1,000 perfectly healthy people have been forced into mental hospitals, an act condemned by the World Psychiatric Association. All this has been part of a comprehensive campaign to make practitioners renounce their beliefs.

Amnesty International, Human Rights Watch, the UN Commission on Human Rights and numerous others have thoroughly documented the persecution. Our federal government has also expressed support for Falun Gong and condemned the persecution in China. In July 2003, House Concurrent Resolution 188 was passed unanimously and now House Concurrent Resolution 304---condemning the persecution overseas and attempts to interfere with American government officials---is before Congress. Several state elected officials have also previously expressed concern in letters to Ambassador Yang Jiechi. Again, we must unequivocally say that the harming of innocent people for their beliefs is morally wrong and cannot be tolerated by a civilized society.

Among US residents, four Washington State Falun Gong Practitioners were illegally detained while they were in Beijing in February 2002. American citizen Dr. Charles Li from Menlo Park, California was arrested upon landing in China at Guangzhou Airport in January 2003 and has been in detention for over one year, after a mock trial under the false charge of "sabotaging of radio and television equipment."

Many Falun Gong practitioners are good, hardworking citizens of Washington State. As elected officials it is our duty to listen to their voices and to uphold their rights, including the right to freedom of belief. We sincerely hope that one day soon, these Falun Gong practitioners and all those who may wish to, will be free to practice the exercises of Falun Gong in China and to be free citizens following the principles of "Truthfulness, Compassion and Tolerance."

Although China is our friend, we must decline your invitation, and call for an unequivocal end to the persecution of innocent people on the basis of their belief. 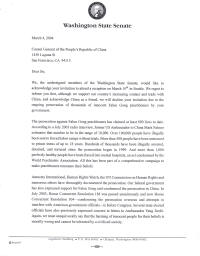 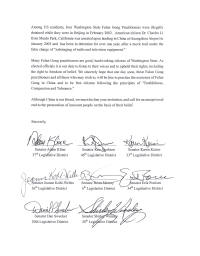