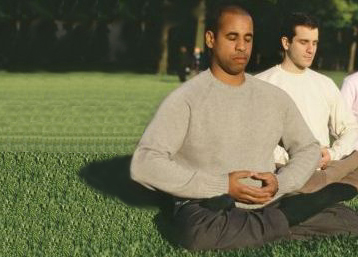 David Bowie's Reality tour made a stop in Vancouver, BC recently. GM Place was packed with every imaginable age and variety of alternative rocker. Between shirt vendors and poster dealers were two tables: one for Amnesty International, the other for Friends of Falun Gong. But his next stop to Hong Kong was in question.

Sterling Campbell, David Bowie's drummer has practiced Falun Gong for six years. He arranged for the human rights organization that advocates for the spiritual movement to display its materials throughout the tour.

Sterling has drummed for a lot of big names including: Duran Duran, Cyndi Lauper, Percy Jones, Soul Asylum, Tina Turner and the B 52's. Not surprisingly, the fast paced lifestyle of a professional musician caught up with him at one point. Eventually he found himself an alcoholic and drug addict who was getting more and more depressed.

"By the mid-nineties I was like trapped in this stuff, I don't know how not do it, you know, it came like a part of my life... I was searching, how can I escape this and yet I kept falling back into it," he recalled.

Sterling did eventually escape it and his story is pretty amazing. After trying many different treatments and a variety of spiritual practices, Sterling stumbled across Falun Gong on his way through Central Park in New York City. Three weeks later, he'd quit everything and totally changed his lifestyle.

About five years later, Sterling found himself being beaten by Chinese police officers for handing out flyers about the banned meditation practice in Beijing.

Followers describe Falun Gong, or Falun Dafa, as a traditional Chinese self-improvement practice that emphasizes trying to be a better person. The Chinese government began to repress Falun Dafa when a government sponsored survey found that the number of followers exceeded the number of Communist Party members. The spiritual practice was banned in 1999 by former Chinese President Jiang Zemin. Since then, followers say they've been brutally persecuted. According to the New York-based Falun Dafa Information Center, more than 850 followers have been confirmed dead as a result.

Sterling tells the story of how he ended up in China and what happened there:

"[Falun Dafa] was deemed a threat but there was no threat, it was just the sheer numbers of people practicing.

"We used to get a lot of information [from China before the persecution]. There was always a lot of positive stuff, positive stories, you know how people were bettering their lives, having a more harmonious relationship with family and friends and how it was being praised by the government, how it was considered the top qigong school, like really just positive things.

"And then all this stuff happened and back then you were still able to get stuff in real time, about how people's homes were being broken into by the police, to police brutality to people being falsely arrested and sent to labor camps, people being beaten, people being tortured, and obviously, people being murdered. And how people were still courageously just still coming and really trying to appeal to the government and just to tell them that Falun Dafa was a very good thing and this whole defamatory thing was a lie. And they were always met with brutality, really harsh inhumane treatment and yet they still kept coming and my heart was just so moved by so many of these stories, you know.

"A situation came up where there was talk of Western people going to China and I was asked if I was interested in going, and that you take your own initiative and make sure you're doing it for the right reasons. I wanted to go. I was resolved to go. Because when you know something is the truth it has that effect on you...I know these defamatory remarks and all that stuff their saying was a lie, so I had my armor on, just with the truth (chuckles).

"We went to the Great Wall and talked to Chinese people ... we got to Tiananmen Square and it got pretty surreal from that point. We got taken in by the police, and they went through all our stuff you know, and then you start witnessing people being dragged in by their hair, kicked, I mean women and all these police officers kicking and beating them...

"It's just so hard to explain the feeling of it and articulate it because, you know I've traveled a lot in my life and it's so new. You can just look in their eyes and see things were so not right, there was such a darkness about it, you know, being in this police station and so much has happened and you're trying to talk to these police and its like trying to talk to some kind of predatory creature and trying to say like 'Hey, don't eat me,' you know...

"I could have gone to Hawaii but we came here, we spent our money and we're just trying to be straight up and honest and eventually I met up with, you know, some violence, a couple of policemen beat me down to the ground and [I was] just trying to hold to the principles of Falun Dafa, truthfulness, compassion and tolerance and just trying to... I remember reading about it, when the Chinese practitioners were met with violence, you know, they returned it with kindness and compassion, just reading those stories I was... it was like the benchmark, this is what it means to practice Falun Gong, you know. I remember having that [thought] and applying it and it was really just an amazing experience because it wasn't my concern that I was being beaten down to the ground, it was really my concern showing them what Falun Gong was about."

“Falun Dafa Workshop at a Homeless Center in California (Photos)”