(Clearwisdom.net) On February 15, 2004, Falun Gong practitioners in San Diego, Orange County and Los Angeles in California celebrated the first "North San Diego County Falun Dafa Week" at the meeting hall of the library in the City of Carlsbad with local government officials and citizens. 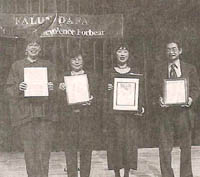 “Germany: "Where Can I Sign My Name?" - Support from the People of Frankfurt (Photos)”

“A Minghui School in Mainland China”