Interview with a Dutch Lawyer About the Lawsuit Against Jiang Zemin: "All Countries Should Help To Stop The Crimes Of Genocide." (Photo)

(Clearwisdom.net) On December 2, 2004, the Dutch Falun Gong Association filed a legal complaint against the former President of China Jiang Zemin, Li Lanqing and the Chinese Minister of Commerce Bo Xilai, charging them with committing crimes of genocide and torture in the suppression of Falun Gong. Renowned Dutch human rights attorney Ms. Liesbeth Zegveld submitted the lawsuit on behalf of Falun Gong practitioners to the National Court in Rotterdam. On December 7th, a reporter interviewed Ms. Zegveld. 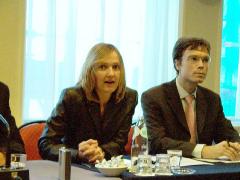 Reporter (R): Could you say something about the law firm where you work?

You are the lawyer dealing with the lawsuit against Jiang in the Netherlands. In the complaint who is the plaintiff? Who are the defendants?

The Dutch Falun Gong Association is the plaintiff acting on behalf of all Falun Gong victims. The defendants are former President of China Jiang Zemin, head of the 610 Office and the Chinese Minister of Commerce Bo Xilai.

R: Why did you choose them as the defendants?

As far as the Netherlands is concerned, it is not easy to launch this case here. The Netherlands has no ability to investigate all of those involved in the persecution. Therefore, among the lot of persecutors we just choose several accomplices who have played leading roles in planning and executing the persecution. Jiang Zemin is the initiator and director of the persecution, while the 610 Office serves as agent to carry out the persecution policies.

On which law is this case based?

Is this case the first complaint against genocide in the Dutch judicial history?

Yes. Yesterday a second complaint about genocide had been submitted. Frans Van Anraat, who was arrested last month, was sued for his involvement in the genocidal campaign launched in 1988 against the Kurds living in Halabja, Iraq. Of course, in Dutch judicial history some lawsuits have been filed for crimes against humanity and torture.

The five-year long persecution is still occurring in China. Jiang Zemin and his followers are in China. Can you sue them in the Netherlands?

The crimes of genocide committed by the Jiang group are not restricted to China. The persecution has been extended to the rest of the world through worldwide activity in the Chinese Embassies. Propaganda slandering Falun Gong has been used to incite hatred against Falun Gong. Various methods have been adopted to persecute overseas Falun Gong practitioners. Besides, we have victims who are Dutch nationals. Though they were persecuted in China, they remain Dutch citizens.

How will this legal complaint develop?

At present, forty-four lawsuits in twenty-seven countries against China's former leader are under investigation or have come to an end. Will the present lawsuit in the Netherlands bring any practical effect or just have a symbolic meaning?

We do hope this lawsuit will have practical effects. Of course, it is not easy. But, we still hope to use the lawsuit to stop [those involved in the persecution] from coming to the Netherlands. If many countries do it in this way, it will warn them not to leave China or they will be arrested. This is an important message conveyed by the lawsuit.

If other major accomplices instead of the three defendants enter the Netherlands, will they get into trouble?

The persecution mainly happens in China. Some Dutch people might think that it has nothing to do with them. How do you view the question?

We have victims of Dutch nationality. Therefore, we cannot say it has nothing to do with the Netherlands. On the other hand, crimes of genocide are the most evil among all criminal behavior. All countries should help to stop genocide. No one can say it is none of their business.

“Practitioner Mr. Luo Xiaolong from the Xinjiang Autonomous Region Died in 2003 as a Result of the Persecution”