The German newspaper Bayervald published the following article on Tuesday the 9th of November 2004 [Translated from German]: 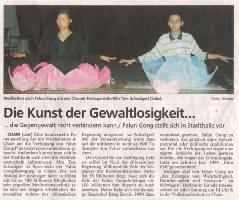 A nationwide anti-torture poster exhibition organized by Falun Gong practitioners visited the city of Cham and attracted a lot of attention to the persecution of Falun Gong in China. People can learn this meditation exercise at the city hall. Ms Min Teng Schwagerl is the organizer of this Falun Gong activity in Cham. This meditation exercise, which was introduced to the general public in China in the early nineties and welcomed by over 100 million people, has been persecuted by the Chinese regime. Ms Schwagerl told a reporter, "Through this poster exhibition, we hope we can raise public awareness of this brutal persecution that has led to over one thousand confirmed deaths by torture."

Ms Schwagerl thinks that the main reason for this persecution is the jealousy of some individuals in the Chinese Government. Over 100 million people were practicing Falun Gong, which almost doubled the 55 million membership of the Chinese Communist Party. The head of the Chinese Communist Party, Jiang Zemin, decided to ban this non-violent and non-political meditation exercise in 1999 and initiated a nationwide brutal persecution campaign against Falun Gong practitioners. He established a special agency called the "6-10 Office", which was named after its establishment date of June the 10th 1999, to carry out this persecution.

According to Ms Schwagerl, the sole aim of Falun Gong practice is to assimilate oneself to the principles of Truthfulness, Compassion and Forbearance. Anyone interested in learning Falun Gong can go to the practice site at Citizen's School at 2:00pm every Sunday.