Australian Democrat Senator Andrew Bartlett said in his congratulatory letter that the Australian Democratic Party wholeheartedly supports the cultivation principle of Falun Dafa, "Truthfulness-Compassion-Forbearance" and people's right to enjoy freedom of belief without interference and persecution from the government. Expressing his concern for the difficulties Falun Dafa cultivators in China have suffered, the Senator stated: "We hope that you will walk even better on the path of striving for your freedom of belief, and we will continue paying attention to your efforts."

Brisbane City Councillor Graham Quirk said in his congratulatory letter, "As you engage in debate and discussions on issues ranging from human rights to the teaching and practices of Falun Gong, I trust that this time of coming together will prove to be highly productive. I hope you will find it to be a time of enrichment and renewal of strength and commitment. In truth, the conference will no doubt carry with it a mix of high enjoyment and contentment, together with a sense of regret and concern over the suffering that many fellow practitioners overseas have endured and in many cases continue to endure. To each of you [...], I extend my best wishes for a very successful conference." 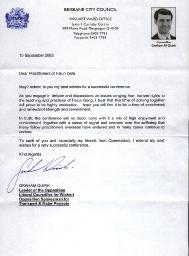 City Councilor A.J.D. Bell in Gold Coast, Queensland said in his congratulatory letter, "Falun Dafa enjoys respect and support in the Gold Coast community. Falun Dafa has done quite well, the practitioners are very enthusiastic, and we have benefited a lot from the activities they held. I hope the conference will be successful, and also hope that all attendees will obtain inspiration and encouragement from the experience sharing."

During the Fa conference, Sydney and Melbourne TV teams played an FGM TV music telefilm and a short film about clarifying the truth that was specifically created for the conference. There was also a recitation of four poems that four Western practitioners had composed for the Fa conference.

The arrival of hundreds of Falun Dafa practitioners from overseas and practitioners from other areas of Australia, and the three-day large-scale activities to spread Falun Dafa caused a great sensation in Melbourne. The "Sound of Brilliance" concert to an audience of about a thousand people was acclaimed as "world-class" by Councilor Dennis Whelan from the city of Harmony. The Chinese community was amazed by the concert. A representative of the community, a former chairman of the Shanghai Commerce Association, commented that the success of the concert was reflected in three aspects: one was the combination of Eastern and Western culture. Highly acclaimed Chinese singer Guan Guimin and a noted local opera performer gave performances on the same stage. In addition, there were also folk dancing performances from Ukraine and Turkey that fully displayed the characteristics of the multi-cultural Australia. The second was that the performances and performers came from not only Melbourne, but also from other areas of Australia and the United States. The third aspect was that the entire concert was immersed in an atmosphere of extreme peace and harmony, but it also made people feel excited. People have gradually noticed that Falun Gong practitioners have extraordinary cohesion.

One of the sponsors of the concert, a respected older overseas Chinese who is the director of the Australian Chinese Culture Center, said that if everybody were like the practitioners, the world would become harmonious.

As it was the first time to hold a nationwide Fa conference and such large-scale activities, Melbourne Dafa practitioners contributed a lot and also improved a lot. With the publishing of Master's new lecture "Teaching the Fa at the Discussion on Fine Art," we feel the importance of our responsibilities. We will reflect on the experiences and deficiencies of the activities so that we can live up to the requirements of the Fa-rectification, and do better in exposing the evil, clarifying the truth and creating the new culture for the human world.