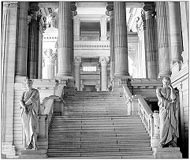 Entrusted by Falun Gong practitioners, on the morning of August 20the renowned Belgian human rights lawyer Georges-Henri Beauthier filed a lawsuit against Jiang Zemin and Li Lanqing with the Federal Prosecutor on charges of genocide, anti-human behavior and cruel torture. Many Dafa practitioners from various European countries went to Belgium to support the case.

This is the first lawsuit to be filed under Belgium's New Law, resulting in the case being treated with enthusiastic interest by Belgium and the international community. More than ten well-known local and international newspapers sent their reporters to interview the lawyer. The lawyer then elaborated on the nature of Falun Gong and the content of the charges, as well as answering many questions raised by reporters. These questions touched some key issues, such as the feasibility of the lawsuit, the nature and scope of the Jiang regime's persecution, etc. The lawyer, Mr. Beauthier, explicitly answered all of the questions one after another. Some international media have published positive and objective reports.

During the press conference, Dafa practitioners from Australia, France, Sweden, Belgium, Swiss, Germany, Denmark, UK and Eastern Europe were promoting Dafa and sending forth righteous thoughts outside the Supreme Court to support the trial of Jiang Zemin and other culprits who are persecuting Falun Gong.

Practitioners displayed eye-catching banners reading "Public Trial of Jiang Zemin," "Falun Dafa" and "Truthfulness, Compassion, Forbearance," as well as photos of Dafa practitioners who have been persecuted in China. In the meantime, they also handed out flyers to passers-by, and told them why Dafa practitioners are prosecuting Jiang Zemin and Li Lanqing on genocide charges.

Last week, Belgian practitioners received news about plans for the submission of the lawsuit to the court. Within a few days, practitioners from outside of Belgium quickly coped with various difficulties and rearranged their daily schedule to rush to Belgium, since they recognized the significance of the lawsuit against Jiang Zemin. As one of these practitioners mentioned, it is not simply an ordinary lawsuit. All the Dafa practitioners need to support one another as a holistic body during the process of the trial.

At this extraordinary historic moment, we are well aware that international cooperation among Dafa practitioners is what Dafa requires us to do during this period.